Golf fans will get a chance to see Big Cat x Little Cat this weekend as Tiger Woods and his 11-year-old son Charlie Woods team up in competition at the PNC Championship. 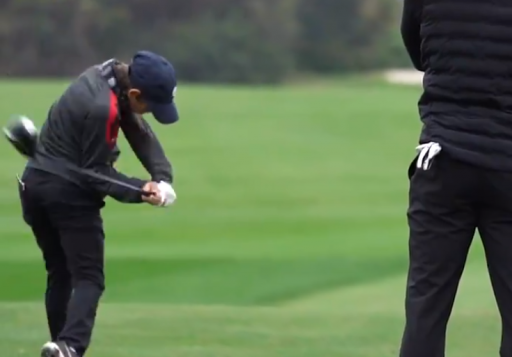 There are a few golf tournaments where Tiger Woods is ever the undercard when he is teeing it up. Only this weekend might very be it as all eyes turn to his 11-year-old cub Charlie Woods.

Judging by the reaction on social media, golf fans around the world are already amazed at Charlie's flawless looking golf swing. WATCH a slo-mo of Charlie's swing in the video below, along with an Inside The Ropes special from the PGA Tour:

WATCH: TIGER AND CHARLIE HIT BALLS ON THE RANGE

"Like all kids, we mimic, and his feels are very similar," Tiger said of Charlie. "He is competitive. Our whole family is that way.  He has this opportunity to enjoy it, and he's doing that."

@TigerWoods looks ahead to his first @PNCchampionship alongside 11-year-old son Charlie. https://t.co/eIqxhusDTt

Tiger Woods and Charlie Woods will form one of 20 teams taking part in the PNC Championship this weekend, which golf fans will be able to watch around the world on Peacock, NBC, Golf Channel and Sky Sports Golf. The 36-hole event will be a Scramble format.

RELATED: HOW TO WATCH THE PNC CHAMPIONSHIP THIS WEEKEND

Here's a look at what a number of golf fans are saying about Charlie Woods on the eve of the tournament:

Related Articles
US continue to dominate International side at 2022 Presidents Cup
Tom Kim rips his pants (TWICE!) at the Presidents Cup

"I had never seen young Mr. Woods swing the club till now...he has a LOT of daddy in him, it appears!!!"

"Wow, I wish my swing looked like that today, let alone at 11 years old!"

"Tiger and his cub are on the prowl to win this weekend, really hope that pull it off."

"Oh my, look at that right arm position at impact!"

"How good is this going to be watch... special bond between father and son."

"I wish I had Tiger Woods as my swing coach!"