Tottenham Hotspur striker Harry Kane celebrated his side's win over Arsenal by watching the Workday Charity Open in his underwear. 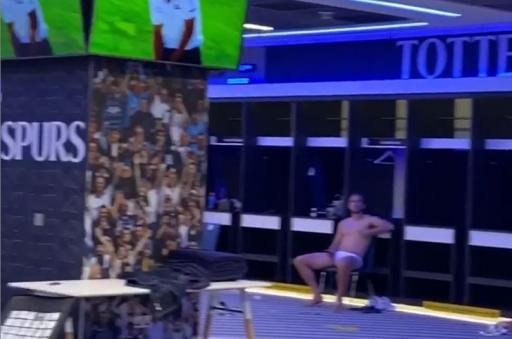 Tottenham Hotspur beat their London rivals Arsenal in a 2-1 win on Sunday and Spurs captain Harry Kane wasted no time in tuning in to watch the final round of the Workday Charity Open.

Kane, who is a huge golf fan and a pretty decent player himself with a handicap of 4, sat in his underwear in the dressing room after his side's derby victory watching the eventful final round at Muirfield Village.

Spurs manager Jose Mourinho, who won what was his first North-London derby after coming back from behind at the Tottenham Hotspur Stadium, posted a video on his Instagram page after the match.

The video showed off the impressive home dressing room of Spurs' new stadium and whilst the music was blaring in celebration of their victory, Kane's attention was locked onto the golf, where Viktor Hovland was standing over a putt.

Hovland went on to finish in third place, taking home $427,800 for his efforts, with Justin Thomas losing out to Collin Morikawa in a play-off.

RELATED: How much every player won at the Workday Charity Open...

Kane made a brief appearance, albeit virtually, at the Charles Schwab Challenge in June, where famous faces were introducing players as they stepped onto the tee.

Introducing his fellow countryman Justin Rose, Kane couldn't help but add a sly dig about which football team Rose supports, with the former World No.1 being a big Arsenal fan.

"On the tee from London, England, he supports the wrong club unfortunately, should be a Spurs fan... Justin Rose," said Kane.