Scottie Scheffler tees up opportunity against Kevin Kisner to become World No. 1

Scottie Scheffler will play Kevin Kisner in the final of the WGC Match Play at Austin Country Club. 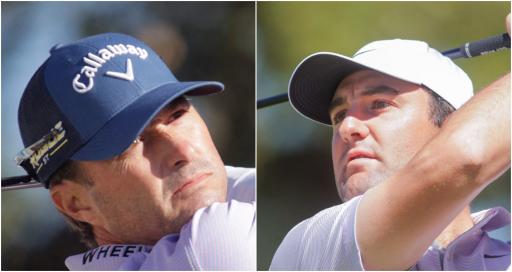 Scottie Scheffler will have an opportunity to topple Jon Rahm as the World No. 1 after he beat Dustin Johnson to book his place against Kevin Kisner in the final of the WGC Match Play.

Scheffler will play in the final of the tournament for the second year running and is looking to avenge the defeat that was handed to him at the hands of American Billy Horschel.

The 25-year-old came out of the blocks and was in fact five up on Johnson by the time they reached the 11th hole.

But Johnson spent 139 weeks as the world's best golfer and is a former Masters champion. He came roaring back and won four holes on the bounce to pile the pressure back on Scheffler.

But Scheffler didn't blink and proved again what a fine young player he is with a clutch shot at the par-5 16th hole. With his driving iron, his golf ball threatened the hole for a near albatross.

Johnson, on the other hand, had sent his second into the bunker and lipped out for birdie. Johnson's birdie attempt lipped out again at the par-3 17th and it handed Scheffler a 3&1 victory.

A dejected Johnson said he felt he was swinging well ahead of The Masters, though. He added of his match with Scheffler: "I gave away too many holes. I missed too many -- I hit a lot of good putts, just was hitting the edge.

"Speed was -- I felt like my speed was just a little bit off. But hitting some good putts and burned a lot of the edges.

"Then obviously the front nine just gave away too many holes. Had to make that putt there on 16. Hit a good putt, too. It just broke a lot more than I was thinking."

In the other semi final Kisner saw off Canada's Corey Conners 2UP. Kisner made the turn leading by one hole but Conners won the 11th and 12th holes to exert some pressure on the match play specialist.

But Kisner came into the semi final with a record of 20-6-1 at this golf course. He is a former winner of this event and has played the course multiple times. Kisner saw off the match in epic fashion with a beautifully judged pitch at the last hole.

He sent his pitch over the hole to a steep bank on the green and walked up to the pin watching his golf ball roll back towards the cup. It was judged to perfection. Conners couldn't make his birdie and that was that. He will play Johnson to see who will finish third.

Kisner said of Conners: "It felt like a heavyweight bout. He's a hell of a ball striker, always in play, hitting great shots after great shots."

Of Scheffler, Kisner said: "Well, he's on a heater. Obviously I need his putter to cool off for me to have a chance. But I want to keep staying annoying out there and see what happens."

Earlier in the week Johnson denied England's Richard Bland, 49, his chance to play in his first Masters with a 3&2 victory in the round of 16.

Then Johnson, the World No. 8, managed to beat Brooks Koepka 2UP. He didn't even lead that match until the 15th hole.

Kisner's route to the semi final was a wild ride. He won the final four holes against Adam Scott to book his place in the last eight in epic fashion.

Then he simply beat up Will Zalatoris, the PGA Tour's 2020-21 rookie of the year with a 4&3 win at Austin Country Club.

Conners beat Takumi Kanaya 5&3 in the round of 16, then he saw off Abraham Ancer 2UP in the final eight.

Scheffler got revenge on Billy Horschel in the round of 16 with a 1UP win, then he beat Ireland's Seamus Power 3&2.