DEBATE: Is it now time to DOCK SHOTS for Tour player STROPS?

Former European Tour pro Gary Evans believes Tyrrell Hatton and Matt Wallace "are a disgrace to the profession" - are some PGA Tour and European Tour pros getting away with their temper tantrums? 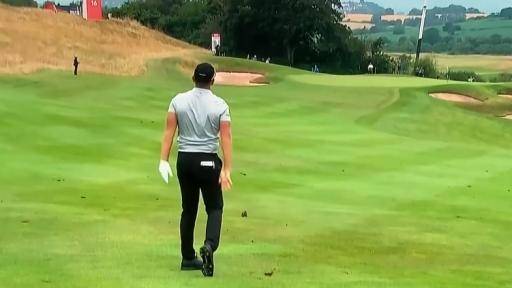 Let's be honest, we have all felt the pinch on the golf course at some point in time. It may have been a few choice swear words, a club toss into the ground, or perhaps the entire golf bag got to see the lake. Yes believe it or not, we have seen a few golfers do the latter in recent times.

Now don't get me wrong, every errant shot on the PGA Tour can cost thousands of dollars and important ranking points, so of course there is huge pressure on these guys to perform with each and every swing.

WATCH: STROPPY JASON DUFNER SMASHES HIS PUTTER AGAINST THE FLAGSTICK!

I totally get that.. this is their job at the end of the day.

However, the big issue I have is that a number of players are throwing temper tantrums far too often compared to others - and something needs to be done about it.

Most recently we saw Matt Wallace, and not for the first time, hurl his club into the turf at the Wales Cazoo Open at Celtic Manor.

The fiery Englishman's club toss was met by irate comments from golf fans on social media, one of which was from former European Tour player Gary Evans.

He also threw Tyrrell Hatton's name into the ring, too.

"What is the matter with these guys?" tweeted Evans, who finished tied fifth at the 2002 Open Championship.

"I mean Wallace and Hatton are a disgrace to the profession. This kind of behavior might happen once or even twice in an entire career but these guys do it weekly.

"What does the European Tour do about it?"

Evans makes a valid point, especially his final line. What is really being done?

Slow play has become a big issue in the sport, and fines and shots are slowly being dished out there at long last. Much more still needs to be done when it comes to the Tour's tortoises, but perhaps coming down harder on the hot heads needs to be next on the agenda... along with encouraging Bryson DeChambeau and others to shout 'FORE' after hitting a wide ball.

One, I think throwing clubs around and snapping them gives our sport an ugly look. Two, youngsters are watching on thinking this is an acceptable way to act on the course. And three, greenkeeping staff have worked tirelessly in the build up to Tour events to get these courses in the best possible shape for the pros. They could at least be showing some respect for the playing surfaces they get paid to play on.

Perhaps the Tour's tantrum brigade are warned by officials behind closed doors, and maybe even some of them get fined a few quid. I doubt it though.

One thing we definitely do not see for bad temper on the course is penalty shots, something I believe would prove the biggest red card of all.

There are numerous other players who have reached boiling point on the course in recent times, and it's far from just England's Hatton and Wallace.

Check out recent PGA Tour winner Erik van Rooyen smashing up a tee box and nearly taking out Wallace's caddie in the same group during the US PGA Championship earlier this May. For me, this was the worst strop of them all.

Jason Dufner also didn't fancy the flagstick much in this one during the Wyndham Championship:

It’s #friday13th and Jason is *WREAKING HAVOC* on the golf course. pic.twitter.com/rdFxk6ToIY

World No.1 Jon Rahm and Belgium's Thomas Pieters, while both seemingly a bit more mellow these days, have been known to break clubs and smash tee boxes from time to time, as too the master Sergio Garcia.

I'm fairly certain the aforementioned players would be reigning it in somewhat if they knew an on-course strop was going to cost them a couple of shots, thousands of dollars and crucial FedEx Cup, Ryder Cup and Official World Golf Ranking points in the process.

Golf is frustrating, we all know that.

One strop is fine, but two or more and you are overstepping the line.

What do you make of the behaviour of some players on the PGA Tour and European Tour right now? Are some of them getting away with it? Share your thoughts and comments on our social media channels - Facebook, Instagram and Twitter.