WATCH: Who remembers this DRUNK golf fan at the WM Phoenix Open?

This golf fan clearly had one too many beers before he entered the WM Phoenix Open two years ago as he stumbled into TPC Scottsdale. 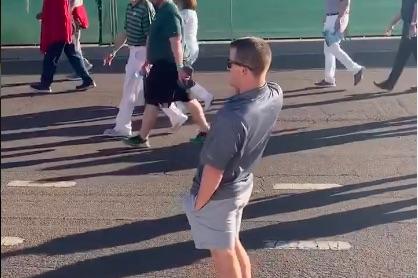 Golf is not a sport that is associated with drunkenness and alcohol when compared to tribal sports such as soccer and American football.

At the Ryder Cup, you will get some drunken behaviour towards players which can turn ugly but all in all, golf is fairly respectful and calm.

Sometimes it is nice to sit and take a rest with a beer in your hands when spectating at a golf tournament. I can empathise with this feeling based on the Open Championships I have been to.

However, there is a difference between this and being blackout drunk before you enter the grounds. This is where the man in the footage below comes into the equation.

As the fans streamed into the grounds of TPC Scottsdale at the WM Phoenix Open, this man was so drunk that he was walking back down the road.

The golf fan is on the phone but I would be very surprised if he was able to talk in full sentences to whoever was on the other end of the phone.

The man videoing the drunk fan rightfully described him as 'the leaner'. It's a miracle how 'the leaner' was able to stay on his feet as he attempted to enter the event.

Below are the best comments on the footage from golf fans:

"His awareness of the curb is uncanny," one golf fan said.

"The fact that he never fell is the upset of the century," another golf fan said.

"What a recovery, great composure through it all," one golf fan commented.

"The fact that he didn’t fall down off of the sidewalk is skillz," one golf fan said.