WATCH: Who remembers when a FIGHT broke out at The American Express on PGA Tour?

WWE wrestler Goldberg was in fine form at the 2002 American Express. His main highlight was throwing a spectator into a lake. 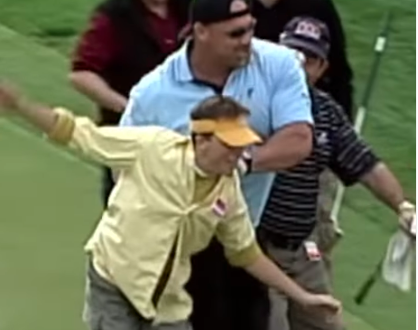 The American Express is a fantastic PGA Tour event that uses multiple venues each year. It is an event that has produced many great moments in recent memory.

As with most tournaments on the PGA Tour, there is a Pro-Am that happens the day before the championship rounds begin and these often feature celebrities.

In 2002, The American Express, or the Bob Hope Chrysler Classic as it was known then, produced some of the best footage of any Pro-Am we have ever seen.

In the field was WWE wrestler Goldberg and he certainly enjoyed himself at the Indian Wells Country Club Classic Course where the event was held from 1960 to 2005.

RELATED: THE BEST NIKE GOLF SHOES TO FRESHEN UP YOUR GAME IN 2022

On the final hole, Goldberg was shaking the hands of his playing partners when a golf fan ran on to the course and started play-fighting with the big brawler.

As much as Goldberg saw the funny side, he shifted into WWE mode. He grabbed the spectator by the back of his shirt and his belt. He walked over to the edge of the green and launched the man into a lake.

Luckily, Goldberg was strong enough to throw the unfortunate man over the rocks by the green to land perfectly into the water. The spectator evidently bit off more than he could chew.

The popular wrestler, who also used to play American football, was in a very violent mood during this Pro-Am. At one stage, he snapped one of his clubs over his knee and gave it to a young boy in the crowd.

Goldberg was clearly excited to be playing at a PGA Tour event. The WWE is certainly a world of the unexpected and Goldberg provided us with many acts from out of the blue that day.

The American Express kicks off today and the event is back to using three venues: the PGA West (Stadium Course), the PGA West (Nicklaus Tournament Course) and La Quinta Country Club.

NEXT PAGE: AKSHAY BHATIA WINS ON KORN FERRY TOUR WITH CADDIE WHO "KNOWS NOTHING" ABOUT GOLF