Day two takeaways at The Players: Flawless Justin Thomas and chaos at 17

Justin Thomas played beautifully to cultivate an under-par round in chaotic conditions at TPC Sawgrass. 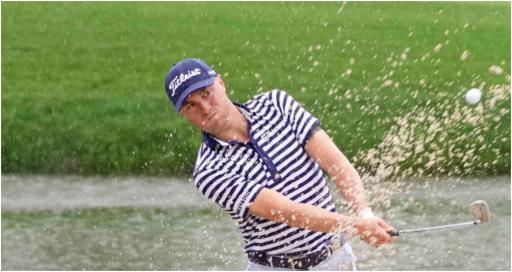 Justin Thomas is attempting to go where no player has gone before and retain his title at The Players Championship.

Heading into his third round at TPC Sawgrass, Thomas is likely to be one of very few who will shoot a bogey free second round.

The weather forecast in Florida was promised to be dreadful. It delivered. And the early players out will have wanted to be elsewhere.

The first four players who pegged up their tee shots at the famed 17th found the water. And that set the tone early on. It was bedlam.

First Brooks Koepka, completing his first round, found the wet stuff. So too did Xander Schauffele, Collin Morikawa and Scottie Scheffler.

Schauffele followed up that water ball at 17 with a catastrophic quadruple bogey at the final hole, with one shot going no more than 16 yards.

He had tried to hack it out of the thick stuff but to no avail. And in one fell sweep he was out of the tournament.

When Schauffele returned to the 18th to complete his second round, he recorded a triple bogey. Pain. Golf is hard.

As for Koepka, when he returned for another crack at the 17th he found the water. Again. His response? To laugh. Like a maniac.

Brooks failed to break 80. It was a second round 81. He had begun his day (playing his first round) under par. Golf is hard.

That island green - which bored fans had previously turned into a waterslide - saw more than 20 water balls.

The projected cut was level par, though that is likely to change because so many of the field had not finished.

Rory McIlroy found himself at 2-over par for the tournament. The Northern Irishman has gone 73-73.

Elsewhere, Zach Johnson - at this point - must be doing a bit. He accidentally hit his ball on a practice swing. Again. Oh Zach.

Justin Rose also had a bit of a meltdown at the 11th hole. He tried to go for the green in two at the par-5 and found the water.

He took out his frustration on his fairway wood. At the 17th, he found the water with his tee shot. Then again from the drop zone. Golf is hard.

Tommy Fleetwood remains out in front, although he only played three holes of his second round.

Thomas, though, was one of the few who had completed his second round and was still under par.

Birdies at two, five and 16 don't sound like much. But that was simply stunning golf. That 69 was forged beautifully.

His shot trajectories - all day - were a sight to behold. A flighted 6-iron into 17. A low fade with a 3-wood into 18. Excellent stuff.

Thomas told the media: "It was very weird [how weather has affected the tournament], obviously hard to get into a rhythm.

"Had a lot of different emotions; first off thinking it looks like we were on the right side of the draw and being pretty excited about that, and then realizing that was very much not the fact and then just having to get over that as quick as I could because it's obviously frustrating, especially when I feel like I'm playing well, kind of getting just thrown into something like that.

"To be perfectly honest, I blame Tiger because I played in the afternoon so I could go to his Hall of Fame ceremony. If I would have just maybe stuck to my guns and played early, I would have been better. I'm just joking.

"I'm thrilled with how I played and how I competed today. It was a very, very tough day, and I just stayed very patient and executed well."

The tournament referee believes we are in for a Monday evening finish, with enough time for a playoff.

Kevin Kisner, like Thomas, was also under par. He told the media that he believed the intergrity of the tournament is somewhat diminished.

There is no denying that the early starters on day two were at a disadvantage. Whatever you think, this Players will be one to remember.

Day two (sort of) may have belonged to the elements. But Thomas will probably think otherwise.

Next page: Zach Johnson hits his ball with practice swing...again