Wesley Bryan strips down to his PANTS at Honda Classic

One of the funniest yet most disturbing videos you will ever see on the PGA Tour this season... 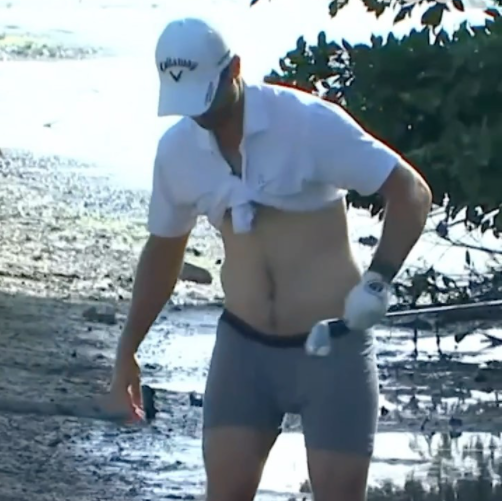 Wesley Bryan produced one of the most comical yet visually disturbing moments of the PGA Tour season so far when stripping down to his pants and tying up his golf shirt to play out of the water on the 6th hole at the Honda Classic on Friday.

Bryan, 30, was already on his way to a missed cut by the time he plonked his tee shot into the ripples at the 6th hole - his 15th hole of the second round - so the thought of taking a one-stroke penalty was not something that ever entered his mind. Off came the shoes, socks and trousers, and instead of taking off his shirt, he tied it up.

WATCH the video below. The commentary team, which featured 12-time PGA Tour winner Justin Leonard, could not believe what they were witnessing at PGA National:

Bryan, who won the 2017 RBC Heritage, went on to make a double-bogey six on the hole en route to missing the cut on 12-over par.

The incident marked the second time during the week that a player had stripped down to their pants to play a shot, with Sebastian Cappelen doing something similar on the 11th hole.

With so much water on display at PGA National, don't rule out seeing more images like this over the weekend.

At the top of the leaderboard, Aaron Wise carded a second consecutive round of 64 to move to 12-under par and three shots ahead of Matt Jones and Brandon Hagy.

GOLFMAGIC TAKES ON THE BEAR TRAP AT PGA NATIONAL - WATCH BELOW: