What drivers do the BIGGEST HITTERS on the PGA Tour have in their bags?

Driving distance has never been more important in golf, with the game being forced to adapt to the monstrous distances that the players can now hit the ball. 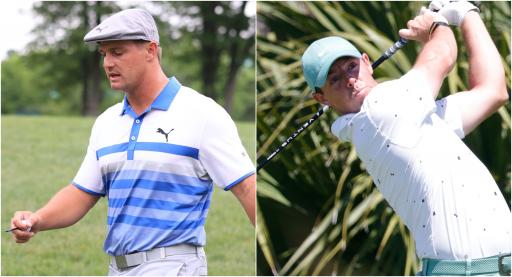 It is no surprise to reveal that Bryson DeChambeau leads the way in driving distance on the PGA Tour and this is a direct result of his relentless gym work and build-up of strength.

DeChambeau has said that he intends to play the way that he has done all season for the US Open this week, attempting to 'bomb and gouge' his way around the course.

The 2020 US Open champion has set the standard for driving distance on the PGA Tour, so let's see what driver he and the rest of the top 10 big hitters have in their bags.

Gary Woodland uses a Cobra RadSpeed driver at 9 degrees, but it is set at 7 degrees with an Accra RPG Tour Z M5+ shaft. The 37-year-old has averaged 310.6 yards off the tee this season and his impressive power helped him win the 2019 US Open at Pebble Beach.

The Chilean superstar Joaquin Niemann has used a Ping G410 LST driver on the PGA Tour this season. It is set at 10 degrees with a Graphite Design Tour AD DI 6 X shaft. His average of 312.5 yards off the tee has helped him to four top-10 and two second-place finishes in 2021.

Luke List has averaged 313.2 yards off the tee this season, using the popular TaylorMade SIM driver which has been a big hit for many golfers in 2021. Although he possesses great power, List has only managed three top-10 finishes in 26 events this season.

Matthew Wolff gained a lot of new fans when finishing second at the US Open in 2020, with his unique yet effective swing. This season, he has used the TaylorMade M1 460 driver set at 9 degrees with a Graphite Design Tour AD HD 7 X shaft to average 314.2 yards off the tee.

Dustin Johnson has often set the pace for driving distance on the PGA Tour, and this season the World No. 1 has used the TaylorMade SIM Max driver at 10.5 degrees with a Fujikura Speeder 661 X shaft to average 314.4 yards off the tee.

Will Gordon is on the impressive list of players that represent Callaway on the PGA Tour and he has maintained his superb distance of 315.4 yards off the tee with the Callaway Epic Speed driver.

Wyndham Clark uses the PXG 0811 X+ Proto driver, set at 10.5 degrees with a Mitsubishi Diamana TB 60 X shaft. His explosive distance of 315.6 yards on the PGA Tour has earned him two top-10 finishes this season.

Much like Niemann, Cameron Champ uses the Ping G425 LST driver, but this one is set at 10.5 degrees with a Project X HZRDUS Smoke Green 70 6.5 TX shaft. In 55 rounds this season, Champ has averaged 317.7 yards off the tee.

Rory McIlroy won the Wells Fargo Championship in May for the third time in his career, using the TaylorMade SIM driver, set at 9 degrees with a Fujikura Ventus Black 6 X shaft. The Northern Irishman is second in the PGA Tour distance rankings with an average of 318.6 yards off the tee.

And finally, Bryson DeChambeau is the biggest hitter on the PGA Tour, averaging a staggering 322.7 yards off the tee with the Cobra King LTD Pro driver, set at 7.5 degrees with an LA Golf Tour AXS Blue 60 X shaft.

His incredible power has led to him winning his first major title at last year's US Open and also securing a victory at the Arnold Palmer Invitational back in March.

NEXT PAGE: TOPTRACER’S RELEASE LATEST 9-SHOT CHALLENGE AT TORREY PINES FOR US OPEN