Brooks Koepka to CADDIE for Phil Mickelson? Aaron Rodgers talks on THE MATCH

NFL quarterback Aaron Rodgers said that he wants to "stir up" Bryson DeChambeau when The Match gets underway on July 6th. 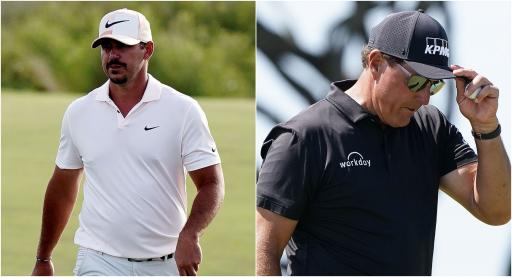 NFL quarterback Aaron Rodgers said that if Brooks Koepka were to caddie for Phil Mickelson during The Match, this could be a way to motivate his partner Bryson DeChambeau.

Speaking in a group interview on Bleacher Report, Rodgers sat down with DeChambeau and their opponents Mickelson and NFL legend Tom Brady to talk about their showdown at Moonlight Basin in Big Sky, Montana on July 6th.

Rodgers, who plays for the Green Bay Packers, believes that if he can motivate his big-hitting partner enough on the day, then they should have no issue with winning.

"I just want to stir Bryson up and get him going," said Rodgers.

"I don't care if it's Phil or Tom or if Phil brings Brooks to caddie, whatever they try and do to get under our skin, if I can just get Bryson going and get him pumped up I feel like it's an easy win for us."

This is the fourth edition of The Match and it is the fourth time that Mickelson has participated. He was victorious against Tiger Woods in the inaugural match, winning $9 million in the process.

Woods got his revenge in the second edition of the event, teaming up with former NFL quarterback Peyton Manning against Mickelson and Brady.

Mickelson, who won his sixth major title at the PGA Championship last month, teamed up with former NBA player Charles Barkley in the third playing of the event and they beat Manning and current NBA player Steph Curry.

Each edition of The Match has been entertaining and the fixture next month should be no different. Brady is particularly looking forward to joining in with the camaraderie.

"At least in football we can trash talk without calling in the commissioner," said Brady.

NEXT PAGE: DUSTIN JOHNSON JOINS BRYSON DECHAMBEAU AS A PARTNER FOR LA GOLF