Brooks Koepka was the centre of attention heading into the week at the US Open and he opened with an impressive score of 69 in San Diego. 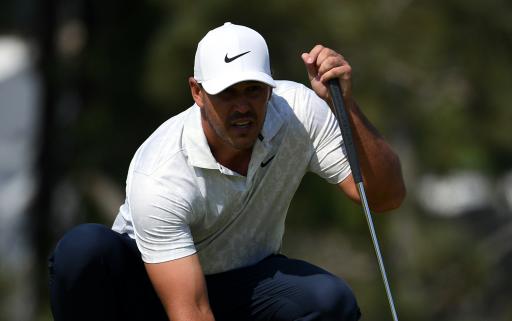 Brooks Koepka started his week at the US Open in impressive fashion, shooting 2-under-par at Torrey Pines at a tournament where many eyes are on the American.

After weeks of talk and analysis of his feud with Bryson DeChambeau in the lead up to the event, Koepka put all that behind him to card a solid score of 69 to get his week underway.

Playing alongside fellow PGA champions Collin Morikawa and Justin Thomas, the World No. 10 began his round on the back nine and made birdies at the 12th, 17th and 18th holes.

Saving par from difficult places is key at the #USOpen

2-time champ @BKoepka knows a thing or two about it. pic.twitter.com/xVeQczcTHm

The four-time major champion hit the front on day one in San Diego with another birdie on the par-4 2nd hole to move to 4-under-par for the tournament.

One of the highlights of Koepka's round came on the par-3 8th hole, where he found himself in a tough spot having to stand in a bunker while playing a high chip shot. He managed to save par to keep his round going.

Bogeys at the 3rd and 7th holes, unfortunately, meant that Koepka dropped two shots back to 2-under-par, but this score represents a very solid start to the US Open.

Russell Henley has finished in the top 10 on four occasions this season on the PGA Tour and he set the early pace at the US Open, shooting 4-under-par at Torrey Pines.

Looking for his first major championship, Xander Schauffele joined Koepka on 2-under-par in his home city of San Diego. The 27-year-old made four birdies and two bogeys in his first round on Thursday.

NEXT PAGE: GOLF FANS REACT TO GOLFER WHO SMASHES DRIVE AFTER DRIVE WITH ONE HAND!