Jon Rahm outlined an amusing story from when his wife Kelley Cahill gave birth to their second baby boy before the FedEx Cup Playoffs on the PGA Tour. 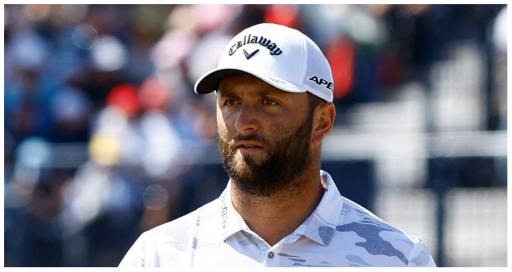 Jon Rahm has outlined how he joked with wife Kelley Cahill she must stop having babies at 1am because it doesn't help with his golf schedule.

Rahm carded an opening round of 3-under 67 at TPC Southwind for the first event of the postseason on the PGA Tour at the FedEx St. Jude Championship.

It's likely that the couple have not been getting a great amount of sleep recently after they welcomed the birth of their second son Eneko on 5 August.

Rahm spoke to the media after his opening round of the first event of the FedEx Cup Playoffs where he outlined they were absolutely convinced the baby would arrive in the first week after the 150th Open Championship.

Yet again there was a little bit of stress for Rahm over his golf schedule. Not that he will care as family is a priority, but it's amusing how his children have both been born on the eve of big events.

Their first little boy, Kepa, was born two days before the 2021 Masters. That's not exactly what you need when you're an elite golfer!

Rahm told the media in Memphis: "Well, the due day was the August 4, but he was born the fifth, but Kelley was ready physically and mentally to deliver.

"We thought the baby was going to come the first week after The Open, we all were convinced, and we kept waiting and last minute we decided to induce so I wouldn't miss any of the events.

He continued: "Yeah, [so] from Thursday to Sunday [we were] in the hospital, didn't sleep much but had a lot of beautiful moments.

"I did tell Kelley as a joke, we need to stop having babies at 1.00am because it really doesn't help the schedule at all, for her and for me obviously, but it's wonderful.

"We've had a blast of a year and almost year and a half of Kepa and to add Eneko to the family -- to those wondering, [it's pronounced] E-N-E-K-O -- it's great.

"It's been really fun for me the last few days and to get the pictures I get, today right before I went out to play Kelley had just nursed Eneko and got a picture of her holding him and she was smiling.

"When I see that type of happiness, it's a lot easier for me to go out there and compete. Even though I won't see them for 20 days, it still gives me a lot of positives and happiness to be out there and do what I have to do."

Next page: Scottie Scheffler takes anger out... on his putter