Jon Rahm and his wife Kelley Cahill have welcomed the birth of their second son, Eneko, who was born on 5 August on the eve of the FedEx Cup Playoffs. 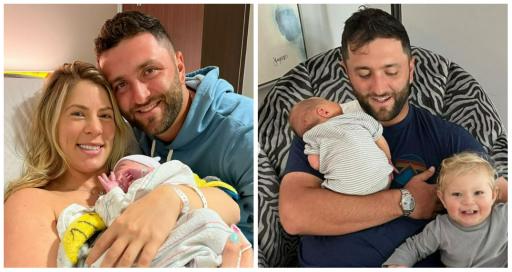 Jon Rahm and his wife Kelley Cahill have announced the birth of their second child.

The Spaniard took to social media to confirm that Eneko Cahill Rahm joined the family on 5 August.

Baby Eneko was born just in time so that the Spaniard did not have to miss out on the first Fedex Cup Playoffs event on the PGA Tour.

The FedEx St. Jude Championship begins on 11 August at TPC Southwind with a $15million prize purse, with the winner picking up $2.7million.

The former World No.1 had been sweating on whether or not he was going to have the chance to play for the Green Jacket.

Rahm ended up finishing T-5 that year. Still, it wasn't a bad year anyway as he ended up claiming his maiden major at the U.S. Open.

The couple married in 2019 at a ceremony in Bilbao, Spain, near Rahm's hometown of Barrika. They met in college.

See a picture of Eneko here with his delighted parents:

Rahm comes into the playoffs ranked the sixth best player in the world.

He was toppled from atop of the rankings by Scottie Scheffler and his remarkable season that has seen him win four times, including the Masters.

Rahm is currently ranked 16th in the FedEx Cup standings. The last two years, he has finished fourth and second.

Of course, the fact that Scheffler and likely LIV Golf-bound Cameron Smith are so far in front means that he'll have to really rally his efforts if he is going to claim the $18million top prize at the Tour Championship.

Rahm has posted six top-10s this year, compared to 15 the previous season.

His lone win this season came at the Vidanta Mexico Open in May.