The plaque that was placed into the fairway after Dustin Johnson holed out for eagle in 2018 at TPC Southwind has gone missing. 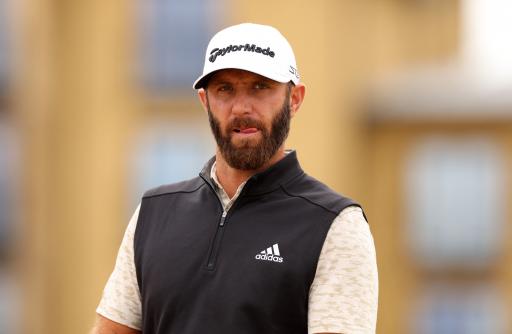 When Dustin Johnson claimed the 2018 FedEx St. Jude Championship on the PGA Tour you might remember he did so in style.

In the glorious sunshine that Sunday at TPC Southwind, Johnson, now a LIV Golf Invitational Series player, has already forged himself a huge lead.

He only had a 9-iron into the 18th green. He hit that famous, beautiful cut. When it landed softly, it was stiff. Then it rolled in. Cue scenes.

With that, he claimed his 18th victory on the PGA Tour. As is the case when a player hits an incredible shot, it was immortalised with a plaque.

It's no longer there. Golf Digest's Shane Ryan did some digging and the reason wasn't a slight by the Tour towards the LIV defector.

The publication reports that even PGA Tour representatives inquired as to the plaques whereabouts this week.

They report that Burt Baine, the general manager, explained that the course underwent maintenance in 2019 and a bunker was placed in the exact spot where Johnson, now 37, hit his shot.

Still, it doesn't really make too much sense to put it back when they find it. I mean, given the bad blood involved in the golf world at the moment they'd hardly think this was a priority.

Next page: Has Cam Smith all-but confirmed his future path?