Bryson DeChambeau may be taking some time away from the PGA Tour, but this does not mean he is resting... 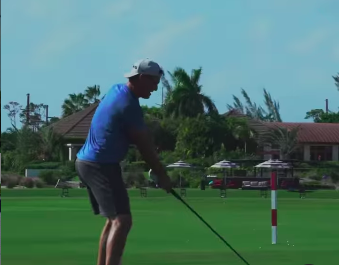 Bryson DeChambeau is constantly on the move. If he isn't competing on the PGA Tour, he is exciting fans at the Ryder Cup. If he isn't doing that, he is hitting drives as hard as he can in Nevada deserts.

And now, even on the most luxurious of holidays, he continues his strenuous and relentless work on the driving range alongside one of his fellow long drive competitors.

The World No. 6 is currently enjoying a lovely vacation in Albany, Bahamas. The sun has been beating down and although many people in his situation would sit back and relax, this is not the way he rolls.

DeChambeau has been working hard once again on the driving range, committing blood, sweat and tears to his practice and hitting bombs into the Caribbean sky.

Tiger Woods & Bryson DeChambeau play CATCH on the range at Hero World Challenge
Tiger Woods net worth: How much is the golfer worth as he continues his rehab?

He has been working alongside Martin Borgmeier, a fellow Long Drive competitor. They may be dedicated to their work, but they have also taken some time out to themselves.

On his Instagram story, DeChambeau has posted videos of him and his friends on what appears to be a speedboat. They even take a dip in the deep, blue water.

The 28-year-old is certainly enjoying life at the moment and the luxuries he has at his disposal are a direct product of his fantastic 2021 season on the PGA Tour.

It was just over 12 months ago when DeChambeau won his first major title at the US Open and he followed this up with another win at the Arnold Palmer Invitational in March.

RELATED: RORY MCILROY DID SOMETHING HE HAD ONLY DONE ONCE BEFORE AT THE CJ CUP!

He is an eight-time winner on the PGA Tour and is now a two-time member of the US Ryder Cup side. He provided a massive contribution to America's record 19-9 win at Whistling Straits.

He endeared himself to the US fans in Wisconsin, something that he hasn't necessarily done in the past. DeChambeau is in a great place at the moment and this shows by his exploits in the Bahamas.

NEXT PAGE: WILL WE SEE TIGER WOODS AND CHARLIE WOODS AT PNC CHAMPIONSHIP WITH NELLY KORDA?