Will Zalatoris and former PGA champion Jason Day emerged from the chasing pack at Torrey Pines to share the 54-hole lead on 14-under-par on Friday. 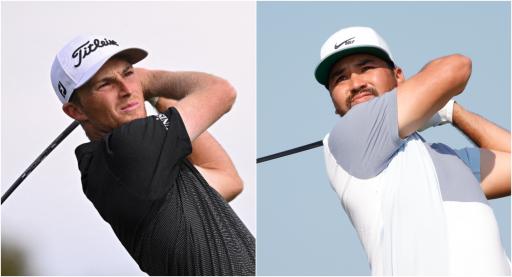 Will Zalatoris and Jason Day shot respective scores of 65 and 67 to fire themselves into a share of the lead after 54 holes at the Farmers Insurance Open.

Zalatoris, the winner of the 2021 PGA Tour Rookie of the Year award, started the third round six shots behind the halfway leaders Jon Rahm, Justin Thomas and Adam Schenk on 7-under-par.

The 25-year-old started in perfect fashion on the 2nd hole on the South Course at Torrey Pines. He holed his second shot from 38 yards out for an eagle to move to 9-under-par.

Five more birdies on an exciting day gave Zalatoris the clubhouse lead on 14-under-par. He is continuing his fine form in 2022 after finishing tied sixth at The American Express last week.

Joining him for the lead was Jason Day, a player we all want to return to his best. The Australian carded a score of 5-under-par on day three to match his young opponent.

Day, the winner of the PGA Championship in 2015, made two birdies on the front nine at Torrey Pines and four birdies on the back nine. His only blemish came on the par-4 12th hole.

Since the end of February 2021, Day has finished in the top 10 on the PGA Tour just once. His last win came at the Wells Fargo Championship in 2018.

Rahm began the day in solid fashion. He made two birdies on the front nine, but met trouble on the 10th hole where he made a damaging double-bogey.

The World No. 1, who won this tournament in 2017, made another mistake at the 12th hole which led to a bogey. He bounced back at the par-4 15th hole with a birdie.

He shot a tame 72 on Friday to finish one shot behind Zalatoris and Day on 13-under-par. He is tied with Englishman Aaron Rai in third place.

Thomas endured a day of inconsistencies in San Diego. He bogeyed the 2nd and the 7th holes, but also made three birdies on his front nine to move to 14-under-par.

A weak finish of two bogeys in his last four holes put the World No. 6 two shots behind with 18 holes remaining. Thomas is searching for his 15th win on the PGA Tour. He is tied with Sungjae Im and Cameron Tringale in fifth place.

NEXT PAGE: THE BEST GOLF BAGS YOU CAN BUY FROM CLICK GOLF IN 2022!