Jon Rahm was asked about his emotions after a few weeks on the PGA Tour which have seen him drop a few F bombs and smash his driver into the turf on a tee box at Torrey Pines. 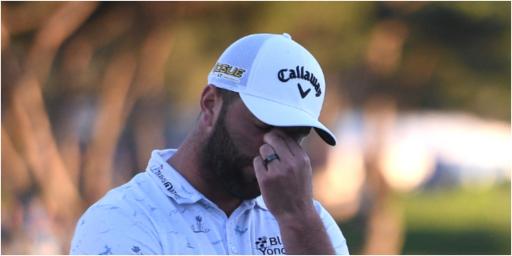 Jon Rahm has been showing his emotions on the golf course a lot over the last few weeks.

Not that this is anything new, for Rahm has always been the type of player to wear his heart on his sleeve.

We have seen it in the Ryder Cup in Paris when he took down the mighty Tiger Woods. Just how much did that scalp mean to him?

And famously when those putts dropped at Torrey Pines last year en route to his first major victory at the U.S. Open.

But have we ever seen him get this angry on a golf course? Watching him slam his driver into the ground was a sight to behold.

It does beg the question, would our reactions be different had we seen these types of antics from Bryson DeChambeau?

We'd never hear the end of it. But it appears Rahm has been getting somewhat of a pass for his outbursts of frustration.

Rahm, at the time of writing, was one shot back from Jason Day and Will Zalatoris going into the final round at the Farmers Insurance Open.

It was after his third round where he decided to explain the source of his passion which has seen him let a few F bombs slip recently.

"Things are not always going to go your way. Golf, my dad used to tell me, it's a game of misses. Whoever misses his swing or shoots the best is gonna end up winning. Like he said as well, when it bothers you when you get a reaction when you hit a bad shot, it's because it matters. And it's a good thing that it matters. That should not change. The day it doesn't matter is probably the day you should stop playing golf.

"So it's about how you react to these emotions, right. Will you let it get you let's say in a negative spiral and affect you in the next shot. Or will you use it as a motivation to hit a better shot afterwards. Billy's right... I mean me more than anyone I can tell you I get upset when I hit a bad shot. And sometimes I get a reaction but when I'm on top of the next one it's almost fueling me to be better. They have a stat called bounce back birdies on Tour and that's usually something I'm up there at cause after I bogey something good comes afterwards, right. It doesn't necessarily mean it's a bad thing."