Despite an errant tee shot on the 10th hole at the Emirates Golf Club, Rory McIlroy fired a 66 on Friday to launch himself into contention. 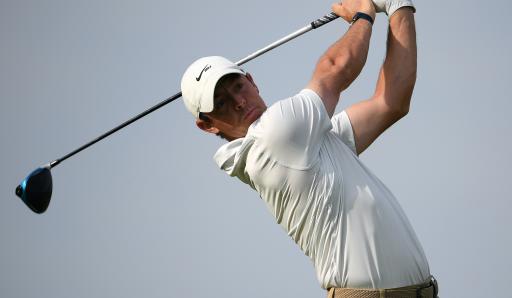 Rory McIlroy shot a fantastic score of 6-under-par on Friday to finish four shots off the lead at the Slync.io Dubai Desert Classic.

McIlroy consistently struggles to find his best golf in the first two rounds of events, but he reached 7-under-par at the Emirates Golf Club to get within touching distance of leader Justin Harding.

The Northern Irishman made two birdies in his first four holes and added two more birdies on the back nine. The highlight of his round came on the par-5 13th hole where he made a fantastic eagle.

His bogey-free card was not without risk though. On the par-5 10th hole, he hooked his drive to the left of the fairway and he found the desert.

The four-time major champion knew his ball was travelling towards the wasteland and as you can tell in the footage above, he used some choice words to persuade his ball from landing in that area.

Nonetheless, this was one of his four birdies of the day. After a conservative round of 1-under-par on Thursday, McIlroy is well in contention in an area of the world he loves playing in.

Of his 14 wins on the DP World Tour, four of them have come in the Middle East and he is a two-time winner of the Slync.io Dubai Desert Classic.

The South African Harding produced a solid round of 4-under-par to follow up his 65 from day one. He sits on 11-under-par and leads by two shots from Tyrrell Hatton.

Hatton, who has won four Rolex Series events, bogeyed his first hole of the day in Dubai but responded with four consecutive birdies.

His 66 put him in outright second place with Erik van Rooyen and Fabrizio Zanotti in behind on 8-under-par in tied third.

Viktor Hovland broke into the world's top five players last week and he is proving his credentials in the Middle East again. His 3-under-par 69 on Friday put him in tied fifth place on 7-under-par alongside McIlroy and Richard Bland.