Xander Schauffele may be regretting his decision not to stay at the Olympic village in Tokyo. 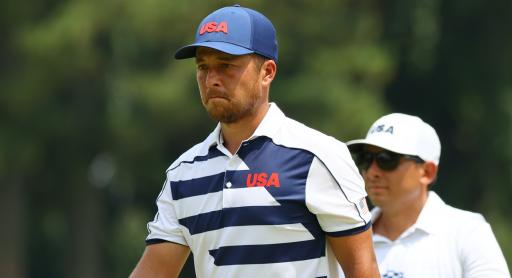 Xander Schauffele decided to stay in a hotel in Japan as opposed to the Olympic village this week for an easier commute to Kasumigaseki Country Club.

However, Schauffele was left regretting this decision after he told reporters that he had a hellish night in his accommodation when the air conditioning broke down and his hotel last all power.

"I'm staying 20 minutes away and I felt that storm coming in," Schauffele told the media on Thursday.

"Our hotel actually lost all power, so AC went out last night, which was a nice feeling - An emergency light came on, we had to unscrew a light bulb or sleep with the lights on.

"My caddie slept with the lights on in his hotel room. I don't know. It was out for probably five hours."

Temperatures and humidity have soared at the Olympic Games this week, so it can't have been pleasant to sleep in that heat without any air conditioning.

The World No. 5 and his caddie may have had a difficult preparation for the tournament, but this hasn't stopped him from surging into the lead after two rounds in Saitama.

After a solid start on Thursday, Schauffele burst out of the blocks on day two with three birdies on the front nine and a superb eagle on the par-4 6th hole. He reached 6-under-par for the tournament at the turn.

The 27-year-old made another eagle on the par-5 14th hole and he made birdies on his last three holes to produce a superb round of 63 and to lead the tournament on 11-under-par.