Xander Schauffele burst into the lead in the second round of the Olympic Games, carding a superb score of 63. 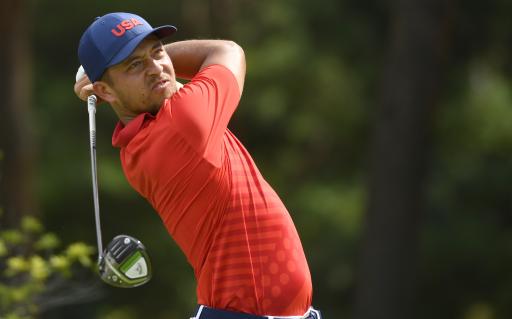 Xander Schauffele surged into contention for a gold medal in the second round of the Olympic Golf after carding a great round of 8-under-par.

The World No. 5 began the second day at Kasumigaseki Country Club on 3-under-par and he got to work early on with three birdies on his front nine.

Despite making bogeys at the 3rd hole and the 7th hole, Schauffele made a brilliant eagle at the par-4 6th hole to reach 6-under-par for the tournament at the turn.

The 27-year-old, who has not won on the PGA Tour since the Sentry Tournament of Champions in 2019, played his last five holes in 5-under-par, including another eagle at the par-5 14th hole.

Schauffele finished on 11-under-par which places him at the top of the leaderboard and one stroke ahead of Mexico's Carlos Ortiz.

Much like the first round, play was suspended on Friday as a result of dangerous weather and with some players yet to complete their second rounds, play has been permanently suspended until Saturday morning.

Rory McIlroy remains in the hunt for an Olympic gold medal after the Northern Irishman carded a great score of 5-under-par, putting him on 7-under-par for the week.

Shane Lowry is also alongside McIlroy on 7-under-par after carding a 65 on day two, so the Irish are mounting a strong challenge in Saitama.

Home favourite Hideki Matsuyama was in the thick of contention at Kasumigaseki Country Club before his second round was suspended with only two holes to play.

The Masters champion is currently on 8-under-par and will have to finish his round on Saturday morning. Paul Casey remained in the hunt for the podium on day two by reaching 7-under-par before his round was also interrupted by the weather.