Lag putting: the key for Open success and what you can learn from it 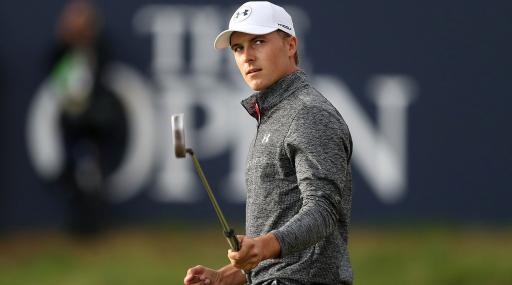 Whoever lifts the Claret Jug as ‘Champion Golfer of the Year’ this Sunday night will likely have made a few clutch two-putts from long range on Carnoustie's giant greens, writes specialist putting coach James Jankowski.

If you’re playing in an Open Championship, especially if the course is providing a stern test, you will be almost guaranteed to leave yourself a number of long distance putts for birdie or even par.

The key for success will of course be keeping out the hay, but also avoiding a three-jab. So what is it we can learn from the best lag putters in the world?

For me, there are two keys to consistent success. Tendencies that I see from so many of the best lag putters in the business.

2) They are able to produce the same tempo stroke over and over again, irrespective of the distance of the putt

The BEST Golf Bags you can buy from Click Golf in 2022!
Best golf gloves you can buy on Amazon this weekend
Graph showing how too much acceleration causes the ball to move off the face faster with the putter not slowing down

Firstly, let’s talk about letting the putter do the work. How do the best putters do it?

Contrary to popular belief, acceleration is not our friend when it comes to controlling the speed of our putts, or any part of putting for that matter.

If we want to have control of our putts, we need to allow the ‘dead weight’ of the putter to work through impact - a phrase I have heard world renowned short game coach Stan Utley use very often.

Something we can see when looking at some of the greatest putters of all time - Brad Faxon, Ben Crenshaw and in the modern era Jason Day - is that in actual fact their follow through is perhaps marginally shorter than their backstroke.

They have made sure their backstroke is both long and fast enough to create momentum for the downstroke, much like a pendulum.

A common fault I see from so many golfers, especially those with poor speed control, is the need to create acceleration through impact.

Often the result of a short, slow backstroke, requiring the creation of enough extra speed in the downstroke to achieve the required distance with the ball.

This acceleration has two main negatives. Firstly it makes it difficult to control the speed of the putter through impact, with the speed ever increasing into impact. Secondly, using Newtons second law of motion, Force = Mass x Acceleration, as more acceleration is found at impact, there is a greater force being impacted onto the ball. This greater force means the ball comes off the putter face faster (higher smash factor) and therefore its speed is much harder to control.

Secondly, I also mentioned tempo earlier, so let’s talk about that.

So many great putters have an incredible ability to repeat the same tempo over and over, no matter the distance, controlling the speed of the ball through adjusting stroke length. In a nutshell, the greater ball speed they wish to produce, the longer the backstroke will be.

However, for every single putt, the backstroke time will remain almost exactly the same. In other words, if their backstroke is 0.6 seconds and downstroke 0.3 seconds, it will be so for every distance of putt, whether it a six-footer or a 60-footer. This is what is meant by their TEMPO being the same. For a longer stroke, as the putter is travelling a greater distance in the same amount of time, it must travel faster. This is what produces the greater club speed, and therefore ball speed at impact.

HOW TO ADOPT A PENDULUM MOTION...

This is often a way I like to describe how a putter should work in an efficient putting stroke. Imagine a pendulum swinging for a moment, with the mass (or bob) at the bottom end of a cord. The first thing to note is that the mass is accelerating at the greatest amount when it is travelling most vertically in the downswing, just after the transition.

Once it reaches close to the bottom of the swing, there is a very short period where the mass will be travelling at a constant speed, before the upswing where it decelerates. This is how our stroke should feel, with the greatest amount of acceleration early in our downstroke, allowing the putter to almost fall through the ball.

The second thing to notice is that the higher the swing of the pendulum, the greater the speed of the mass, but the relatively unchanged time of the swing. In other words, the tempo is unchanged. Imagine this being your backstroke and through stroke. The time it takes to get to the end of each swing is exactly the same, no matter the length of stroke.

Next time you’re on the putting green, give it a go. Make sure your backstroke is long and fast enough on those long putts to create momentum, accelerate early on in the downstroke, allowing the putter to almost fall onto the ball and do the work. Feel the ‘dead weight’ of the putter and let it swing through impact.