Why you should consider using Tiger Woods' putting drill... 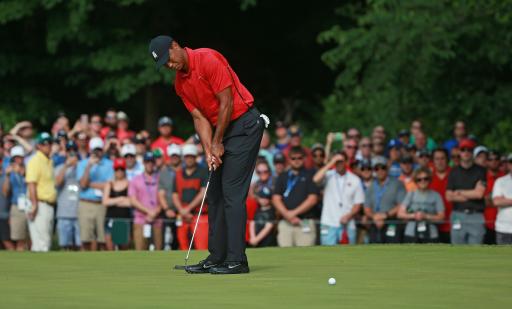 In need of a quick fix with your putting? We recommend you try this simple GATE PUTTING DRILL as adopted by the one and only Tiger Woods.

Check out this awesome clip below of Woods' putting routine during last week's Genesis Invitational, as posted by Golf Rabble - with a video from @gunygolf59 on Instagram...

"Tiger Woods' putting routine on the practice green is a sight to behold," says Golf Rabble.

"It makes we want to create my own similar routine as I get warmed up for a round.

"From what I've noticed, he usually goes out with about four balls and begins by hitting short putts one-handed. He will do this for a few minutes and then he will find a putt that breaks the way he likes, and he will put a couple of tees on either side of his putter head to create a small pathway for his putter.

"He will then hit a bunch of putts through the tees. After he's done that for a few minutes, he moves to lag putting for long distance feel."

WATCH: TIGER GOES FISHING FOR HIS GOLF BALL IN A TRASH CAN!

This cool "gate putting drill" is something Woods leans on every week and it has built up his consistency, particularly on shorter putts.

Want to practice putt exactly like Woods? All you need is two tee pegs to create the gate. Either you hit the tees, or you ingrain a straight-back, straight-through putting stroke that forces you to hit the ball in the centre of the putter face.

Regular GolfMagic instructor and PGA professional Adam Glass talks you through the drill itself in the video below...

Here's Woods applying the drill during the 2018 Ryder Cup at Le Golf National...

Woods also uses an EyeLine Putting Mirror to make sure his eyes are straight over the ball and his shoulders are nice and square.

NEXT PAGE: TIGER WOODS GETS COLD SHOULDER BY US RYDER CUP TEAM

PGA Tour
Rory McIlroy on how he could "easily" save amateur golfers 10 shots
Equipment news
American Golf sales performance up 55% compared to same period in 2019
PGA Tour
Golf journalist has an absolute SHOCKER with Jon Rahm on the PGA Tour
PGA Tour
PGA Tour pro after seeing rookie Tiger Woods: "What the F was that?"
PGA Tour
Patrick Cantlay opens with a 10-under 62 on day one at The American Express