Having amassed global success with its Penta franchise, TaylorMade has moved away from numbers and letters by introducing a premium, five-piece multi-layer golf ball aptly and memorably named for its remarkable tee-to-green performance. 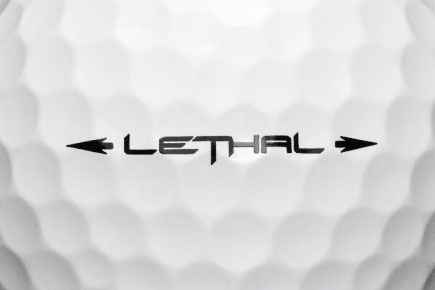 A five-piece ball of five-star quality. If only it was a three-star price.

When TaylorMade unveiled the name ‘RocketBallz’ two years ago, I remember some people bleating into their iPhones and being very quick to judge with the consensus being that it was the beginning of the end for TaylorMade.

How wrong they were, as the RBZ went on to become the best selling fairway wood of all time. So for those that have already judged Lethal by its STA-White cast-urethane cover, be warned!

Having amassed global success with its Penta franchise, TaylorMade has moved away from numbers and letters by introducing a premium, five-piece multi-layer golf ball aptly and memorably named for its remarkable tee-to-green performance.

While the Penta TP5 was a decent ball, primarily for the Tour staff player with much higher swing speeds, TaylorMade says Lethal will suit the mid-to-low capper who can drive the ball in the 90 to 100mph swing speed range.

The brand also says Lethal, featuring progressive velocity technology and a seamless low-drag performance dimple pattern for improved aerodynamics, carries as far and rolls further than the Pro V1x in the wind.

Although I continue to use the Titleist Pro V1, that decision may be swayed this season given the Lethal performed just as well for me when I set sail around a blustery and cold Laranjal recently. Drives were carrying just as far but seemed to run that extra bit further due to the lower trajectory.

But just because it’s a firm golf ball doesn’t take that spin element away around the greens. I might not be able to zip back a 7- or 8-iron like a Tour pro, but I can with a wedge and Lethal provided me with that drop and stop action time and time again. I actually managed to spin a 40-yard bunker shot back to within a few feet of the pin.

Feel at impact, particularly with the wedges, was superb, as too sound off the putter face and durability for the round. Speaking of durability, TaylorMade staffer Justin Rose actually managed to use just nine balls - when formerly listed under Project 5 - all week when he won the Turkish Airlines World Golf Final at the end of last season. To put this in perspective, the Englishman would usually play a different ball every two holes! He also used this ball to hole ‘that’ putt in the Ryder Cup.

If there is one negative, it’s that £45 is little on the steep side of things, yet this tends to be the trend in the ball market at the moment and the Lethal is by no means the most expensive out there.

The Lethal is a five-piece ball of five-star quality. If only it was a three-star price.

Have you used the TaylorMade Lethal yet? Tell us what you think in the forum below, or you can tweet us @Golfmagic.

Golfmagic reviews in association with Urban Golf, offering more than 60 championship courses across three venues in Kensington, Soho and Smithfield. If you want to keep your game in shape this winter, Urban Golf have some great winter offers including cut-price lessons and simulator hire. Click here for more.