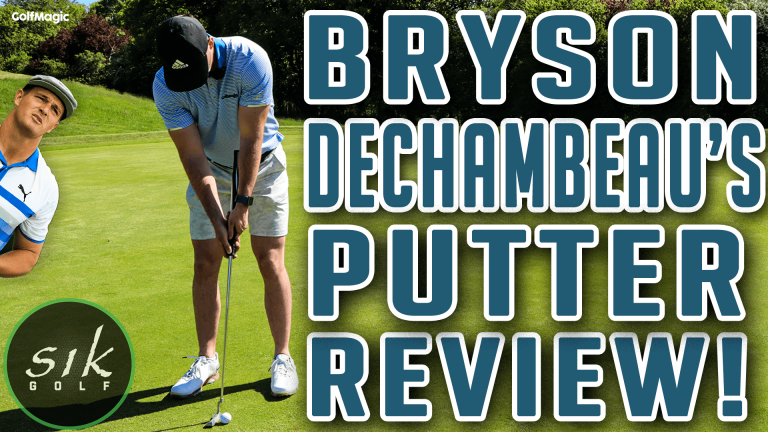 - This putter can really help you reproduce a solid and steady putting stroke by utilising your arms and your shoulders.
- The putter may be out of some golfers' price range.
Our score:
Overall:
5
PRICE: £449.00 YEAR: from 2021

In this video, Alex from GolfMagic reviews the Sik Golf Pro C-Series Armlock putter, used by 2020 US Open champion Bryson DeChambeau, to see how effective the controversial model was on the putting surface.

The armlock style putter has divided opinion and there have been various players and experts who have spoken out against its use, as it resembles the banned style of anchoring.

Nonetheless, while the putter is still legal, Sik Golf have produced the Pro C-Series Armlock putter which instils confidence in your putting stroke and allows you to make solid strokes every time.

Sik Golf have become extremely prominent in the United States and their reach has now spanned into the UK. Their revolutionary technology produces putters of superb quality and at a premium price as well.

The Sik Golf Pro C-Series Armlock putter can come in a number of different lengths, however Alex reviewed the 42-inch edition which is the version that Bryson DeChambeau uses on the PGA Tour.

The armlock putter is becoming prevalent on the PGA Tour as different players are beginning to experience the benefits of the controversial style.

There is a question as to whether the armlock style should be illegal and if it encourages anchoring which has already been banned in professional golf.

When you take your stance to the putter, the appearance of it isn't too extravagant when you look down the shaft. It is a solid club design that doesn't think too far outside of the box.

When you purchase one of Sik Golf's putters, they can customise different features of the club depending on factors such as your height or just what you prefer to see in your putter.

When you take hold of the club, you should make sure that the large grip is aligned with your left forearm. This will make a rigid feeling in your arms that creates a descending angle of attack on the ball.

The idea of this grip and stance is that it eliminates the movement of your wrists in your stroke and promotes the use of your arms and the rocking of the shoulders.

The armlock putter, despite dividing opinion in professional golf, is still entirely legal and Sik Golf lead the way in their production.

If you are a golfer who struggles to reproduce a consistent stroke when you are faced with important putts, then this could be the putter for you.

From long putts to short knee-knockers, the Sik Golf Pro C-Series Armlock putter can help you to repeat a solid stroke and this will increase your confidence on the greens.

Arguably the only downside to the putter is that it comes at a premium price. The normal Sik Golf Pro C-Series Armlock putter costs £449 ($500) and depending on what shaft you choose, it can cost up to £799 ($899).

You can also enter ouw GolfMagic competition for a chance to win a Sik Golf putter. Follow this link to our Instagram page to find out more: https://bit.ly/3q3AsDO.