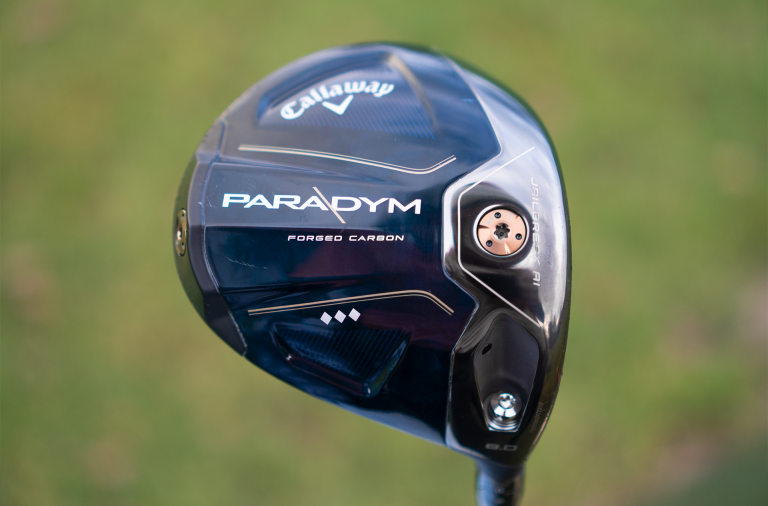 - An improved, solid feel - Consistent low-spinning ball speed off the club face - An impressive modern aesthetic, a very nice colour scheme
- £599 is extremely expensive and some golfers may hesitate to pay this sum.
Our score:
Overall:
5
PRICE: £599.00 YEAR: from 2023

Callaway has launched their brand-new Paradym, Paradym X and Paradym Triple Diamond drivers which will be available on February 24, 2023.

Callaway has aimed to produce "unparalleled distance" with these designs in the new year. They have been launched alongside the exciting Paradym irons and Paradym fairway woods and hybrids.

The new Paradym drivers are set to be used on the PGA Tour by Callaway golfers Jon Rahm, Xander Schauffele and Sam Burns. The three unique models contain their own qualities which cater to a wide range of golfers.

Take a look at our Callaway Paradym Triple Diamond driver review below on YouTube and leave any comments and questions you have on this exciting new addition to the market.

What are the Callaway Paradym drivers all about?

The Paradym Shift Construction features an industry-first 360-degree Carbon Chassis which removes titanium from the body. Callaway could maximise weight and stability in this way.

The Paradym driver features high MOI and adjustable perimeter weighting. Players can see up to 12 yards of shot shape correction with the 15g sliding weight.

This driver promotes a high launch and low spin as well as a neutral ball flight. The company describe this as their "best combination of distance, forgiveness and adjustability."

The Paradym X driver is constructed for a high launch and high MOI. This club has a slight draw bias and features 5g of rear weight placed to increase launch for maximum carry distance.

The Paradym Triple Diamond driver has a compact, 450cc shape. It is made to be the lowest-spinning and lowest launching of this trio. The 14g back weight can be moved to the front for lower spin and higher workability.

Which golfer is the Callaway Paradym Triple Diamond driver suited to?

The Paradym Triple Diamond driver is suited to better players who want to work the ball in the air. It is a low-spinning club which is less forgiving than the other two drivers in the set.

If you are looking for a driver with low spin, you should test this club. We can't emphasise enough how surprised we were with the consistently low spin levels when using a GCQuad launch monitor at Gray's Golf.

To begin with, we weren't a fan of the Callaway Paradym Triple Diamond. Our accuracy was poor and we found consistency in ball-striking hard to come by.

But after adjusting the shaft and the weight in the club head, we experienced huge ball speeds with this driver. We averaged mid-180 mph ball speed and an average yardage of 343 yards in distance.

We loved the look and performance of the Callaway Rogue ST driver of last year, but this new driver for 2023 produces higher ball speeds and closes the gap between the ball speeds of the TaylorMade Stealth.

The Triple Diamond is meant to be the least forgiving model of the new trio. We found that all over the club face, this is a low-spinning driver, more low-spinning than any driver we have tested.

If you are a player who gets too much spin from your drives, you should test this club. The spin rates were extremely consistent and very low as well.

This is one of the best-looking drivers we have seen for years. The colour scheme of gold and blue is very striking and the look down at address is impressive.

When you look down on the club, you can see the 360-degree Carbon Chassis on the crown. This Carbon Chassis is 44% lighter than before which means you can increase MOI, forgiveness and feel.

As well as improved ball speed, we thought the feel was better than the previous Callaway Rogue ST driver. This year's club felt springy off the face and solid all around.

The Callaway Paradym Triple Diamond driver is very impressive. We enjoyed increased ball speeds and explosive distances which are two key factors that you should look for in a new driver.

Across the club face, it was the lowest-spinning driver we have tested according to the data we collected. As with every new driver, our success came after shaft and weight adjustment, so it is always important to be custom fitted for a driver that caters to your swing.

If you buy this club off the rack, it probably won't suit your swing speed and trajectory. Custom fitting is more important than ever as it helps you to get the most out of your new club.

One issue with this new club is the price. With an RRP of £599, this is extremely expensive. Callaway won't be on their own in 2023 in promoting expensive clubs, but some golfers will find it hard to justify paying this astronomical sum.