Its head is made ultra-thin four-piece titanium with aerodynamics helping generate higher ball speeds and its 'chemically-milled face making it more forgiving.'The Diablo Edge standard driver is available in 9-, 10-, 11- and 13-degree lofts as well as a draw version.And 8.5-, 9.5- and 10.5 in a Tour model. 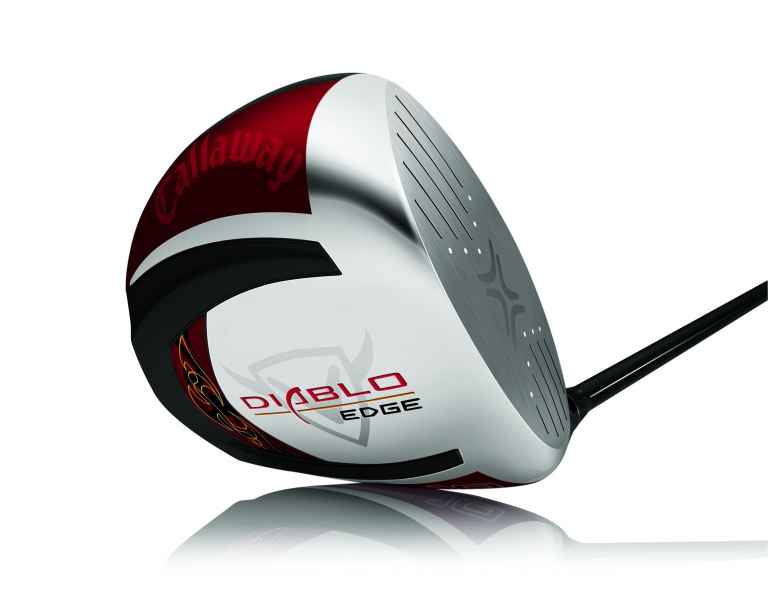 Having already propelled Alvaro Quiros to become the longest driver in world golf, Callaway is now planning to help the rest of us discover our inner big-hitter with the launch of a new line of drivers for 2010. But power is only half of the story, I claims, with the new Diablo drivers (standard and Tour versions) offering both distance and forgiveness.

As you might expect, the new drivers feature the sort of technical advancement we’ve come to associate with Callaway. Far from being a simple cosmetic touch-up, this is a full-blown overhaul with updated geometry, improved aerodynamics and a new four-piece design helping to create what the company claims is the most weight-efficient all-titanium driver it has ever produced.

The fusing of crown, sole, face and internal weight enabled Callaway engineers – led by Briton Dr Alan Hocknell – to make the body of the driver much thinner than would have been possible with a standard casting. The weight saved was then moved lower and further back in the head, with a carefully positioned weight chip lowering the CG (centre of gravity), improving the launch conditions and even giving a slight draw bias. If you want to bomb drives these, surely, are your ideal conditions.

With so many restrictions on size, dimensions and materials, engineers have also identified aerodynamics as an area where performance improvements can be made. By streamlining the clubhead design, this year’s Diablo produces 8% less drag than its predecessor. In a game of fine margins, the extra 1mph of ball speed that equates to is not an insignificant gain.

A new process of ‘chemical reduction’ has also been used to remove unwanted material and vary the thickness of the hyberbolic face. The result is a more consistent ball speed, even on off-centre hits. Again, it’s a small improvement, but factor in all the other developments and it becomes clear this club is greater than the sum of its parts.

Thankfully, it’s not just a question of seeing the benefits in a laboratory. Take the Diablo Edge to a driving range and you’ll soon realise just how much better this club is than what went before. Not to say that the BB Diablo was lacking – for the high-handicap slicer it’s excellent – it's just that the new version is an improvement.

As well as the revised aerodynamics giving it a sleeker look, the bulge on the toe portion of the club is far less pronounced at address and it sits beautifully behind the ball. The graphics on the sole are more subtle and the  Diablo logo on the crown makes alignment easy.

But how does it play? Will it turn Albert the hacker into Alvaro the crusher in three swings? The answer, encouragingly, is maybe. Like all Callaway drivers it’s easy to hit, goes straight and will quickly become a faithful companion. Better than that, the ball tends goes 'miles'! Even without my own personal choice of loft and shaft, it was easy to get out there using a standard stock shaft and loft. A properly-fitted Diablo would surely be a match for anything.

It makes a loud, crisp sound at impact and produces a towering flight -not overly high but enough to ease any worries about getting the ball airborne consistently. Better players will perhaps favour the more penetrating ball flight of a Tour model that sits one degree open, has a more conventional, pear-shaped head and a full-length hosel.

The higher lofted versions of the standard Diablo Edge (11 & 13) are one-degree shut to help counteract a slice.

A resounding success from Callaway. The new Diablo Edge is better than the original in every way and really delivers on its promises. Higher handicappers will love the easy-to-achieve high ball flight and generosity on mishits, while the better player will love the more traditional looks and feel of the Tour version. Something for everyone.