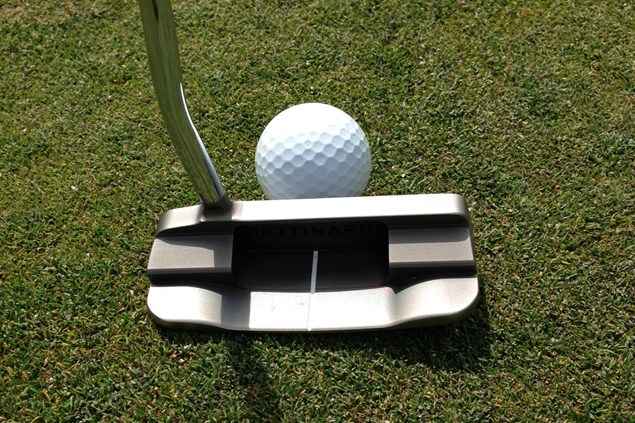 This putter was designed with direct input from PGA Tour player Matt Kuchar. The Model 1 is a beautifully crafted, wide-body blade that features the brand's tour proven FIT Face technology. The Sunset Blue finish gives the Kuchar Models a rainbow effect in the pocket. The arm lock model, as used by Kuchar, is best used when the butt-end of the grip is placed two inches below the left forearm, and the right wrist is hinged into the grip of the club. This is meant to promote an extremely stable stroke, eliminating the wrists and hands from getting involved especially on the short putts. With the anchoring ban set to take effect January 1, 2016, the Kuchar Models will remain 100% legal says Mike Davis, Executive Director of the USGA.

The technology employed in the face of this putter clearly works as the feel provided is fantastic. I like that it has a soft feel which also provides superb feedback which in turn allowed me to judge distances easily. One of the best feels available in 2014.

I was also really impressed with the true and consistent roll from the flat stick. Straight off the bat the ball is going end over end and I rarely had to contend with any dreaded skids or jumps. I also enjoyed the increased stability provided by the slightly oversized blade head which also still provided agility from distance.

This is one of the best putters on the market today, no doubt. It has a superb feel and performs extremely well. It's expensive at £225 but you very much get your money's worth.