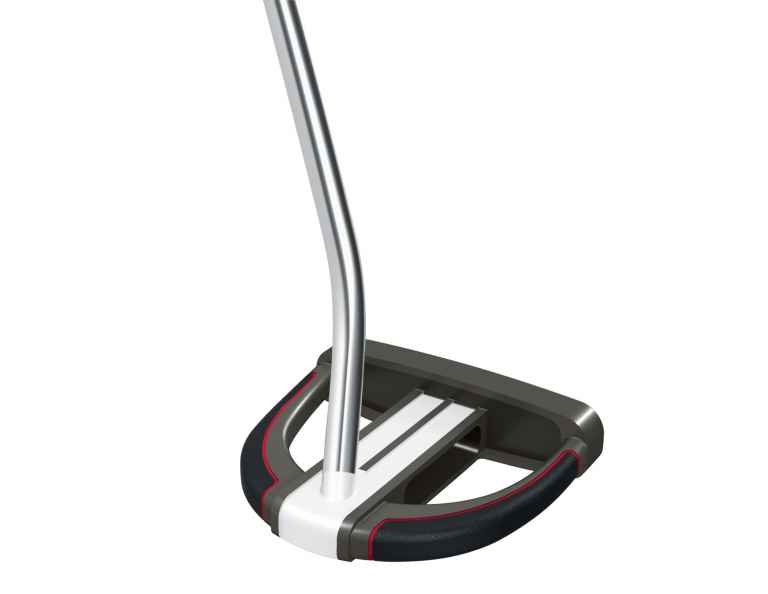 As a forward press golfer, it took some getting used to addressing the ball with the perception of it well forward in my stance because my line of sight was no longer impeded by the shaft. But the results were remarkable - eventually!

Just as the golf swing often needs a slight movement to trigger it - like the right knee of Gary Player kicking in - so the putting stroke usually works best preceded with a slight forward press.

Mark McNulty and Phil Mickelson both make this small but distinctive movement and it's no coincidence that on their day no one putts better.

However, when amateurs try to emulate the pros, the forward press tends to de-loft the putter face and send the ball bouncing rather than rolling toward its target.

It's with this fault in mind that Odyssey introduced a new line of three models of putter - Backstryke Marksman, Backstryke Blade and Backstryke Two-ball - aimed at improving the putting stroke while, assisting alignment and roll.

Odyssey engineers discovered that if they moved the shaft well behind the face and closer to the putter head’s centre of gravity it would help promote a more fluid and stable stroke and deliver accuracy, consistency and better distance control

As a forward press golfer,  it took some getting used to addressing the ball with the perception of it well forward in my stance because my line of sight was no longer impeded by the shaft. But the results were remarkable - eventually!

Initially it was difficult to control distance because the position of the face was promoting the upstroke to get the ball moving with top spin. From longer distances I was blasting the ball past the hole and missing the ones coming back. At shorter range I was fearful of lipping out and not being positive enough.

Related Articles
Odyssey Tri-Hot 5K Putter Range 2022 Review | On The Putting Green
Odyssey introduce array of NEW PUTTERS, but which one will YOU buy?

However after several rounds and an abandonment of both my left-below-right and claw grips in favour of orthodox reverse overlap, the Backstryke Marksman with its 33-inch shaft, has become my preferred putter - at least for the time being in this fickle game.

I have learned to control my distance on the longer putts now that I've understood how the shaft position helps keep the wrists firm and stable during the stroke and I have learned to trust the firm feel the multi-layer insert gives me on the shorter putts.

With the soft, tacky feel of the grip and the alignment markings on the head, it suits my eye better than the Two-ball or the Blade options. I haven't reached the dizzy heights of a Mickelson or a McNulty in their prime but I'm finding the roll that the Backstryke Marksman gives the ball, compliments my instinctive forward press.