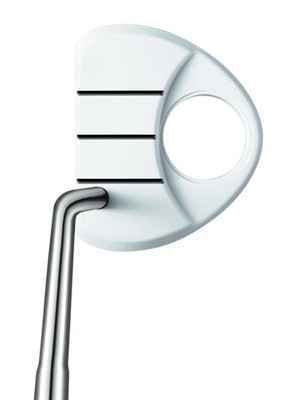 I rolled in a 25-foot par-saver - the first time I'd used this Corza Ghost in competition and followed up with one of my hottest putting rounds in weeks.

Ever since I first laid my hands on the Odyssey DFX 2-ball back in 2003 and the Never Compromise SC-1 Red putter in 2005, I've missed that firm crisp feel from the putter face that consistently delivers the ball to the back of the hole.

A succession of softer-feel inserts in putter heads have come and gone ever since. Some have worked for a time and others have been discarded for various reasons of looks, feel, alignment and my inability to handle them under pressure.

But I know instantly when a putter likes me and I like it back.

Such a moment came this week when after a poor approach to an opening par-4, I found the back of the green in three shots and promptly rolled in a 25-foot par-saver - the first time I'd used this Corza Ghost in competition. I followed up with one of my hottest putting rounds in weeks, sadly not matched with the rest of my ailing game.

Introduced with significant input from former Ryder Cup captain Dave Stockton, the Ghost, with its white metallic head and distinctive alignment lines, also has that magical ingredient - a positive, firm feel that gets the ball to the hole but without the metallic click which is the hallmark of steel-headed putters.

I've long been an admirer of Stockton, whom I first saw putt Tony Jacklin off the course in a challenge match staged in the early 1991 to celebrate the opening of the re-furbished Hanbury Manor in Hertfordshire. Never the most orthodox players with an agricultural kind of golf swing from tee to green but boy, could Stockton putt!

I don't subscribe to TaylorMade's opthalmic spin doctor claims that the contrast of a white putter head against the dark green of the putting surface, makes aiming easier with the Corza Ghost but the three distinctive 'black-on-white' lines behind the ball certainly help me to focus on the target line I intend to set the ball on.

Its mallet head - as opposed to a blade - also makes the Corza Ghost's extremely stable and solid at impact complimenting Rossa's AGSI+ (anti-skid groove system insert), which claims to promote a forward spin and smoother roll.

Without doubt the Corza Ghost attracted much attention during the brief period I spent on the practice putting green, with several golfers asking for a chance to try it and admiring its good looks. It attracted even more compliments - some delivered under their breath - from my playing colleagues as several unlikely putts found the bottom of the cup. It comes with a substantial magnetic-flapped head cover and a £100+ price tag. But if you're looking to salvage some better scores from less convincing approach work, it's a worthwhile investment.