Does the new M3 put you in the driving seat? 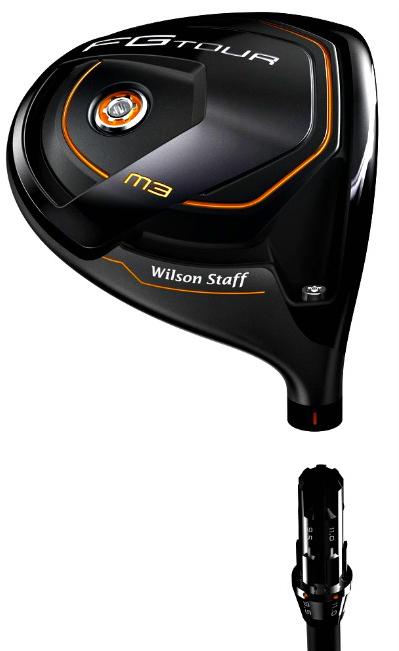 GOLFMAGIC was afforded the luxury of taking a first look at Wilson Staff's brand new FG Tour M3 range. After checking out the M3 iron, the big dog was up next.

While I've always been a big fan of Wilson equipment, there's never really been a driver that has whet my appetite and made me want to go out there and really rip the headcover off. Until now.

Although there doesn't look anything particularly special or fancy about it at address, as you look down on a big iced matte painted crown and black PVD finish with small alignment aid, it's the technology behind this M3 driver that puts the golfer in the driving seat.

With the M3 driver, a club that features a variable thickness face that maximises CT across the face and increases swing speeds, Wilson Staff has thankfully sought to offer the golfer the versatility needed to better fit a wide range of ability.

The M3 driver comes set an initial loft of 9.5-degree but based on a player's ball flight, lofts can be adjusted from 8.5 to 11.5-degree in half degree increments. Wrench in hand - yes say it with me... wrench, Wilson, wrench, Wilson - I wasted little time in setting the driver to my ideal 10.5-degree loft setting.

Another nice touch to the adjustable hosel is Wilson’s Neutral Sole Design (NSD) which, like Cobra’s Smart Pad, ensures the club sits square and stable when grounded. According to my research, each degree of loft changes angle by 0.6-degree and alters spin by 270 to 300 RPM, so this is a welcome addition to the Wilson family.

Although a little heavier than the successful and extremely lightweight D-100 driver, launched at the end of 2012, the M3 could still yet be one of the lightest offerings on the market as we enter 2014 with head weights starting at 198 grams and total weights beginning at 294 grams.

But the biggest and most impressive change to using a Wilson Staff driver are the three new interchangeable sole weights that help create the optimised trajectory in ball flight and increased clubhead speeds, for greater distance off the tee.

Testing the driver out at Wentworth Golf Club alongside Wilson Staff's Tech & Tour Fitter Leigh Fletcher, I was given the option of 3, 7 and 11 gram weights to help me tune the M3 to my desired swing weight and optimise my performance.

Leigh watched me hit six drives with each sole weight installed into the clubhead and it was clear the longest and most accurate drives were with the heavier 11 gram. It was really helping me avoid my one bad drive - the dangerous pull left out of Virginia Water and back down the M3.

Yes Andy, but we can't all have that luxury of messing around with three different sole weights, I hear the gearheads among you whisper into your computer screens and tablets.

Fear not tinkerers. Wilson Staff is including all three weights with your purchase, allowing you to play around with your M3 as much as you like. It's a nice touch, indeed.

Drives, set to 10.5-degree and with the heavier sole weight, were flying to an average of 232 yards and running out to some 250 yards. About average for me but certainly a more penetrating ball flight and consistently solid accuracy. I averaged 227 yards carry and 241 yards distance when I hit the D-100 earlier in the year.

In terms of feel, the standard Aldila RIP Phenom, which has quickly become one of the go-to standards for mid-launch/mid-spin performance, was working nicely for my swing. The transition from backswing to downswing was effortless and the head also felt extremely stable through impact - testament to Wilson's NSD.

While I touched on the bland crown appearance a little earlier, which if I'm honest is the only negative about this driver, the Tour-preferred shape does at least make the 460cc head appear more compact at address than I've seen with previous Wilson Staff drivers. The sole is also pretty neat in gold and black and the headcover looks great in the bag.

Wilson Staff is back and back where it belongs. The M3 driver represents a dramatic move into the fast lane with it's first fully adjustable driver.

While I'm not particularly taken by the appearance, golf is no fashion show after all, and it's the vastly improved Wilson technology that excites me - and I think it will for you. Value for money at £250, too. Quite possibly the best driver you won't necessarily be considering ahead of 2014.

Golf news
"You will never get better if you cheat!": Do you have cheats at your golf club?
Golf news
Golf club bought for £10 million, now being sold for £2 million!
Golf news
Prince Andrew loses his royal patronages: "I didn't know The Queen played golf"
Equipment news
Golfstream unveils new lightweight waterproof golf cart bag
Golf news
Tour pro forced out of Australian PGA after slicing his hand on a stake!