How many yards has Golfmagic's Andy Roberts gained since lofting up to a 10.5-degree SLDR? 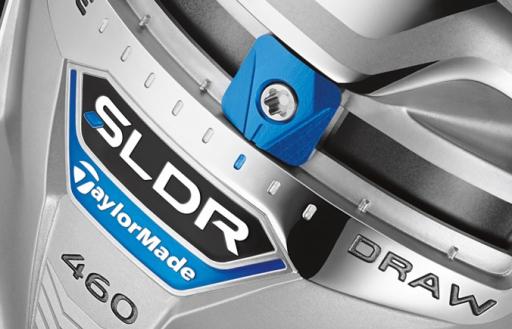 WHEN an email from our friends at TaylorMade HQ pinged up in our inbox informing us of yet another brand new driver at the beginning of last year, we must admit we had to check whether it was April 1.

Having just digested everything the one-size-fits-all R1 had to feed us for early 2013, a driver available in both white and black with one simple 12-position loft sleeve, TaylorMade decided to strike while the driver was hot and unleash the highly innovative SLDR.

Placing TaylorMade SLDR down at address in rare sun-kissed Surrey sunshine there's a modern, classic looking head shape on offer, in a pleasing charcoal grey and black crown. Aesthetically, it reminds me very much of the TaylorMade 200 Steel I used to play as a junior. I'm also a fan of the silver button-back that works well with the subtle crown markings and aids simple alignment.

The button-back is a great move from TaylorMade in my book. It will make it clear to the television viewer that the Tour player, TaylorMade sponsored or not, is using the SLDR.

Turning clubhead over into palm of glove and there's a simple sliding 20g weight on display, positioned towards the front of the driver. I was informed this allows you to move the club's centre of gravity low and forward to promote that desired high launch, faster ball speed and lower spin, which yes you guessed it, creates what TaylorMade claims to be its longest-driver-to-date.

After an hour custom-fitting session for the SLDR at TaylorMade's superb Wentworth Fitting Centre alongside TaylorMade Performance Lab Manager Tom Godwin, I quickly understood why TaylorMade was so keen to get the SLDR out on the shelves so soon after the R1.

The golfer is able to increase or reduce loft of the SLDR up to 1.5-degree increments with a 12-position loft-sleeve for optimal trajectory. Tom decided to loft me up half a degree on my current spec to 10.5-degree after seeing me strike what I thought were three solid drives out to 230 yards carry and 255 yards distance using the SLDR's standard Fujikura Speeder 57 shaft.

"Sold," I said, walking back towards the door, because I thought it would be funny.

"It's good, but it's not quite right," replied my custom-fitting-expert-turned-Roy Walker.

Lofting me up to 10.5-degree and with the touch of a wrench, playing around with several of the hundreds of different shafts available in the TaylorMade Performance Lab, on top of having already seen my rapid hockey-style golf swing, Tom worked his magic and fitted my new SLDR driver to a Mitsubishi Diamana Kai'li 60 S shaft.

It was love at first sight. Drives were flying out on average to 242 yards carry and 267 yards total distance (about a 12-yard distance gain on my previous setup) and the change of shaft had all but eliminated my one bad drive - a dangerous pull to the left when my swing gets too fast and moves out to in.

I also feel like the switch to a slightly heavier stiff shaft, certainly 5g stronger than what I'm normally used to, now allows me to go after the ball much more, and the stable tip-section produces lower launch and spin characteristics for desirable swing data.

Lofting up and shaft switch aside, there's no doubting the SLDR's lower and more forward CG promotes the hotter launch, lower spin and faster ball speed I was enjoying. With CG lower and further forward, I was able to launch the ball on a higher trajectory with much less spin.

To help counter my bad pull to the left, Tom slid - oh, that's why it's called SLDR - the 20g weight up to the Fade end of the driver (+0.5 Slider Fade 5) to straighten me up. It was working wonders.

Along with heavier shaft, I also enjoy the slightly heavier clubhead, too, as I feel like this helps eliminate that dreaded pull over my left shoulder. I also feel like the SLDR delivers much better forgiveness than previous TaylorMade drivers, particularly on shots hit low on the face.

Another positive, and while I'm a big fan of the TaylorMade R1 technology, the 20g sliding weight on offer with the SLDR is much easier and faster to adjust than the previous moveable weight system. I believe you can be much more precise with your tuning this time around as the SLDR generates more than double the influence on a driver's CG than the R1's moveable weights.

On top of that, instead of the R1′s two CG options, the SLDR offers 21 different CG locations that are mapped out on the driver’s sole between the driver’s heel and toe. You really are spoilt for choice.

Looking through our forum and I see several members have been quick to point out the SLDR system is nothing new, likening it to the Mizuno MP-600 that dates back some six years. While I tip my hat to the gearheads among you, one thing to remember is that the SLDR sliding weight track is in the front of the driver and this creates the high launch/low spin characteristics. When looking at the new Callaway Big Bertha Alpha driver, the sliding weight, incidentally just 8g, is positioned at the rear.

If there's a slight negative in comparison to the R1 and R11 drivers, then it's the fact there's no face angle adjuster, a sole plate that allowed you to adjust face angle to open, closed or square in the soled position. The problem with this is that some golfers will be forced to manipulate the face angle to their desired position at address. Major problem? Probably not.

Then again, a plus point from ditching the sole plate and other weighting gizmos is a much more pleasing sound at impact. I must admit I was never a fan of the tinny impact sound of the R1 and R11, and so the SLDR represents much better sound and feedback qualities than its predecessors. It's a thorough pop sound as the ball flies off the face.

Some players might also be a little disappointed there's no white SLDR available, but if you love a traditional, glossy grey look to your driver, like me, you'll be licking those lips.

My distance off the tee increased further when I took my custom fitted SLDR out for my first round at Hersham Golf Club. With TaylorMade Lethal rather than range ball on tee peg, four of the 12 drives (one-third) I struck during the course of the round surpassed the 270-yard mark, including a 295-yard belter down the 18th, albeit downwind.

While several drives were going further right of my target than I'd wish (mainly because the 20g weight is set right to the Fade end) I didn't hit one drive left and that's unheard of in recent rounds. It's my one bad shot and I can't tell you how many shots that has been costing me lately. The SLDR has eliminated it.

A solid round of 2-over off the yellows - I'm a 7-handicapper - says a lot about the strength of the SLDR driver. I then followed that up with one of my best round for three years at Marriott Worsley Park with a round of 74 off the whites. I have never driven the ball so well and that's all down to the SLDR.

I have tweaked the SLDR with my wrench since being custom fit, moving the 20g weight inside a little bit now that I have got my confidence back with the driver more than anything.

To ensure my distances weren't a fluke out on the course, I took the SLDR out to City Point Golf in Moorgate and used the GC2 shot data technology available. I was averaging 270 yards total distance from the 20 balls I struck. That's a solid 15-yard distance gain on my average driving distance.

TaylorMade SLDR looks, feels and performs better than any other TaylorMade driver I've struck before.

It might not be as fancy or as sporty as the R1, but it more than does the job. In recent years, TaylorMade has upgraded its latest driver by adding more. This time around, the SLDR streamlines TaylorMade’s driver technologies into an easier-to-use, more powerful sliding mechanism that gives the driver an ultra low, forward CG.

Expensive at RRP £349 but it's readily available online for little more than £200 and if you can it for that, you're onto a winner, especially when you consider you're getting the combination of faster ball speed, lower spin and the much more effective adjustability. You really will be the proud owner to arguably the best driver in TaylorMade's history.

Click here for TaylorMade SLDR owner reviews. Click this link for our 2013 Ten of the Best drivers test. Got a question about the new SLDR? Let us know below.