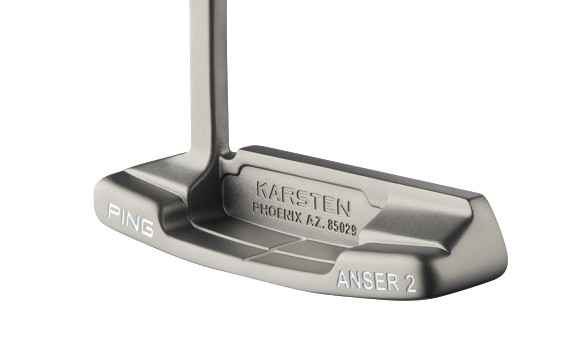 Englishmen celebrate 1966 as the year the Three Lions lifted the World Cup, but putter nerds look back with rose-tinted glasses for a different reason.

Karsten Solheim birthed one of golf’s greatest ingenuities that year in the original PING Anser, which would become one of the most iconic putter designs in the history of the game.

50 years on, the brand pays homage in the TR 1966 Anser 2, and thankfully the new flat stick does its predecessor justice.

By using 3D scans of the original, PING were able to replicate the design of the Anser almost identically.

It’s as gorgeous to look down on in 2016 as it must have been in 1966. The subtle contours and details etched out by Solheim using his mill and hand files are a work of art.

We have come to know the design as the most classic of head shapes, but the new version has a less rounded heel and toe, and thinner top line, which appealed to our sensitivities.

The stainless steel blast finish gives it a modern edge.

Mid to soft feel, offering heaps of response – just the kind of feel we look for. Full marks.

The TR in the title stands for True Roll. PING utilised the technology in the precision milled face design to provide consistent ball speeds across the face.

It seems to work wonders, as there is a surprising amount of forgiveness on offer. At address, we thought off-centre hits would be punished harshly, because of the head shape, but whether we hit it off the heel or toe, we were not losing too much distance.

It's fitting the putter is forgiving, as the original Anser was made because Solheim was struggling with his flat stick, leading him to attach the shaft to the middle of the putter head rather the heel, as was tradition. In addition to a higher MOI, it made the putter more forgiving, and the new version takes this motif a step further.

From distance, we found judging pace easy, whether we were hitting a straight or lagging putt.

And on short jabs, we were also impressed. It’s a well-balanced putter, which allowed us to bring the club through square. The simple alignment line also helped us line up with the hole with ease.

The addition of True Roll technology to the classic head shape offers more forgiveness to one of the greatest putters to ever come to market.

The PING TR 1966 Anser 2 boasts a superb feel, both soft but responsive. From distance and close in, we felt confident over the ball and were holing lots of putts.

At £135, PING has served up a world class flat stick, marinated in history.