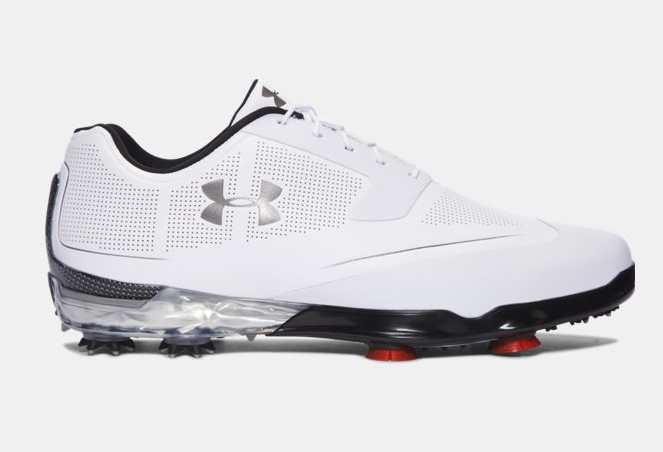 We billed the Under Armour Spieth One as one of the best performing golf shoes on the market in 2017, and the Tour Tips are the almost identical.

Not everyone wants to look like a Jordan Spieth fanboy - especially his competitors on Tour - and for those golfers Under Armour has produced the Tour Tips golf shoe.

No mention of the two-time major winner in the name, no JS logo on the side - they're for the player that wants to play the awesome Spieth One shoe, minus the Spieth bit.

(Or the player that wants a slightly different aesthetic, perhaps. But mostly the Spieth thing.)

Modern, high performance and premium, like the Spieth One. Our favourite is the all white version, which has a classy, progressive look.

The Under Armour logo is more prominent on the side of the shoe, rather than on the heel.

Incredibly similar to the Spieth One. This is to be expected, really, as it shares the same leading technology.

Under Armour’s unique Rotational Resistance Spikes are the highlight of the shoe. Custom studs from Champ are placed on the outside of the foot near the front, and inside near the heel to improve traction.

A carbon fibre external counter keeps the shoes rigid as you exert force through them, keeping us stable and in control even when we really went after one.

These shoes lock you into the ground, and helped us generate power through the swing.

Out of the box there are supreme levels of comfort, thanks to the single seam upper and removable EVA footbed. We played 36 holes in a day in these, and had no issues whatsoever - in fact we would have rather stayed in them rather than change into our trainers.

There are excellent levels of breathability on offer, which is remarkable considering they are 100% waterproof. We tested them in apocalyptic conditions - on more than one occasion - and had no water enter the shoe.

We billed the Under Armour Spieth One as one of the best performing spiked golf shoes on the market in 2017, and the Tour Tips are almost identical.

Heaps of traction kept us locked into the shoe and offered us stability, and there is outstanding levels of comfort on offer.

Just like the Spieth One, this is one of the best spiked golf shoes on the market for 2017.