From Brookline to the Miracle at Medinah: The top FIVE Ryder Cups of all time

From Nicklaus and Jacklin to McIlroy and Reed... here is our top five of all time. 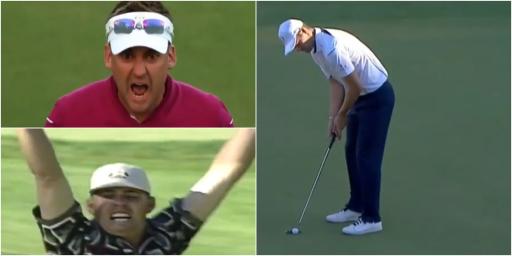 There's no way of making a definitive answer as each choice is subjective - but what is the greatest Ryder Cup of all time?

The 43rd edition of the famous event plays out this weekend where heroes will be made amidst the stunning backdrop of Lake Michigan.

Over three days of golf it has everything, from emotion and sporting gestures to controversies and moments of undiluted joy.

GolfMagic decided to rank the top five, with some honourable mentions thrown in.

The 2010 Ryder Cup had to go into Monday as it was plagued by weather issues due to torrential rain which had disrupted play.

Europe had a three-point lead going into the final day but a dogged response from the Americans brought them back into it.

It all came down to the anchor match between Graeme McDowell and Hunter Mahan. And it went to the wire.

The Northern Irishman made birdie at 16 to keep his lead and it all proved too much on 17 when Mahan memorably duffed his chip.

The concession was made and Europe regained the trophy they had lost at Valhalla in 2008.

It holds a special place in Colin Montgomerie's heart as he lead the Europeans that week.

Phil Mickelson memorably took over the microphone from Mahan in their press conferance afterwards as the American couldn't speak.

"He just beat me today," Mahan teared up, taking a sip of water.

Filled with pure emotion for the Europeans.

Sam Torrance holed an 18-foot putt for birdie on 18 to secure his point.

Torrance, with a pencil resting on his ear and in his bright red jumper, held his hands aloft.

He was the swarmed on the green.

"I rolled it down and in she went," Torrance said.

"And then my life changed forever."

One of the great @RyderCup moments from through the years. pic.twitter.com/sQFw5Q9LzE

Encapsulates what sport is all about.

With the scores tied, Tony Jacklin and Jack Nicklaus headed for the 18th.

You know the story, Nicklaus makes his par putt.

It forced Jacklin needing to get down in two.

Jacklin left it short by two feet but Nicklaus conceded it.

US captain Sam Snead was reportedly livid the Golden Bear picked up the ball marker.

One of the greatest golf moments ever.

Not a dry eye in the house

Darren Clarke's performance at The 2006 Ryder Cup will never be forgotten.#MondayMemories pic.twitter.com/GYLtC2Gg5r

The 2006 Ryder Cup was all about the European team and saying goodbye to Heather Clarke.

These were the words used by Ian Woosnam to describe the events that unfolded at the K Club.

In front of his home crowd, Darren Clarke inspired the Europeans to victory after the sudden death of his wife.

Embraced by players on both sides, Clarke could barely control his emotions as he celebrated his victory on 18.

The most clutch finish to a @RyderCup match ever.

The greatest Ryder Cup ever.

The United States, captained by Davis Love III, were dominant over the first two days of play.

This one is over.

But something happened on Saturday evening.

The Europeans began to stir.

First Luke Donald and Sergio Garcia took down Tiger Woods and Steve Stricker by the narrowest of margins.

Then Ian Poulter came out fighting.

He rolled them in from everywhere in the Medinah sunset.

I believe that it's not over, that's what I learnt from Seve, Jose Maria Olazabal said.

The Europeans came out in Seve Ballesteros's navy and white colours the next day and won.

Olazabal was a broken man.

His side had secured eight victories in the singles and halved one to claim the trophy by a single point.

"I had a lot of thoughts this week for my friend Seve," he said. "This one is for him."

From the putt, to shirt , to @JLeonardgolf 's celebration, the 1999 @RyderCupUSA comeback victory at Brookline was one to remember. #TBT pic.twitter.com/GW9tzg6ZBW