Bryson DeChambeau's golf coach admits he wants to end his feud with compatriot Brooks Koepka ahead of the Ryder Cup. 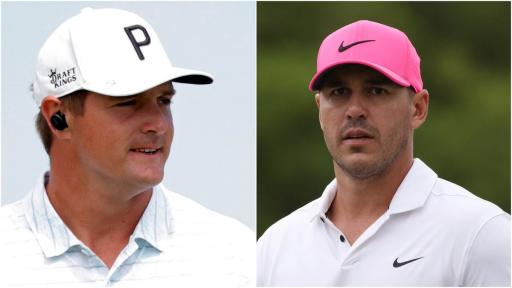 Bryson DeChambeau's golf coach Mike Schy admits the big-hitting American wants to end his feud with compatriot Brooks Koepka ahead of this week's Ryder Cup, according to an interview in The Times.

Schy was speaking just days before DeChambeau and Koepka team bid to help Steve Stricker's United States team win back the Ryder Cup from Europe at Whistling Straits this week.

"Whether or not they are both doing it to maximise their global profile, Bryson wants it over," Schy told the Times.

"Move on. The bottom line is two big egos."

RELATED: BROOKS REVEALS THE ORIGIN OF HIS FEUD WITH BRYSON

Both Koepka and DeChambeau have been at a war of words the past few years on the PGA Tour, none bigger than at the US PGA Championship earlier this season when Koepka rolled his eyes as DeChambeau walked past him during an interview.

RELATED: WILL BROOKS AND BRYSON BE PAIRED TOGETHER AT THE RYDER CUP?

Schy also made it clear in his interview with The Times that DeChambeau will be giving it everything for the United States.

"At times, when he's struggling, it can look a little selfish, but the reality is he is doing his best to contribute.

"He loves representing his country and was very disappointed not to go to the Olympics."

NEXT PAGE: MCILROY MAGIC TO BRYSON CONTROVERSY - 10 THINGS WE WANT TO SEE HAPPEN AT THE RYDER CUP THIS WEEK