Bryson DeChambeau may have a Long Drive Championship to look forward to, but first, he must focus on the Ryder Cup. 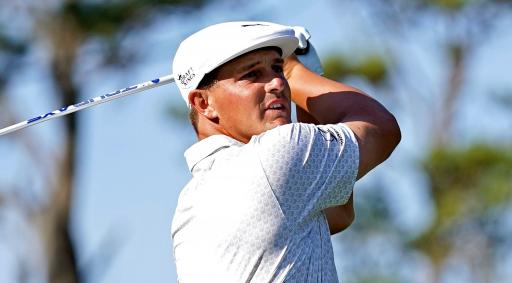 Bryson DeChambeau has been preparing for the Professional Long Driver's Association World Championship on September 27, which has been documented on his social media accounts.

The big-hitting American is getting primed and ready for action in Mesquite, Nevada but he must first turn his attention to Wisconsin for the Ryder Cup this week.

In the latest video posted to his Instagram page, DeChambeau is seen smashing a drive 383 yards and he asks his fans "How many greens will I hit?" in reference to Whistling Straits.

Since his first appearance at the event in 2018, the 28-year-old has bulked out in the gym and built his strength, changing his entire approach to the game of golf and the PGA Tour.

In the process, he has become a US Open champion and an eight-time PGA Tour winner and also, one of the biggest and most controversial personalities in the sport.

He has made the most headlines in the 2021 season because of his power play, but also because of his well-publicised feud with Team USA teammate Brooks Koepka.

It will be very interesting to see who US captain Steve Stricker pairs DeChambeau up with this year, as he did not experience a lot of success at Le Golf National three years ago.

The man from California played in pairs with Tiger Woods and Phil Mickelson, but he lost both of his matches and he also lost his Sunday singles showdown with Alex Noren.

The American fans will no doubt be ecstatic to see DeChambeau bomb his drives around Whistling Straits and the atmosphere is set to be at fever pitch.

The US side are favourites to win just their second Ryder Cup in the last six renewals of the event, so DeChambeau will be doing all he can to secure a point for Team USA.

NEXT PAGE: PGA TOUR: HOW TO HIT PHIL MICKELSON'S INCREDIBLE DECKED DRIVER FROM THE TREES