McIlroy magic to Bryson controversy: 10 things we WANT TO SEE at the Ryder Cup

From maniac Ian Poulter smashing his chest to the unlikeliest of heroes, this is what we would love to see. 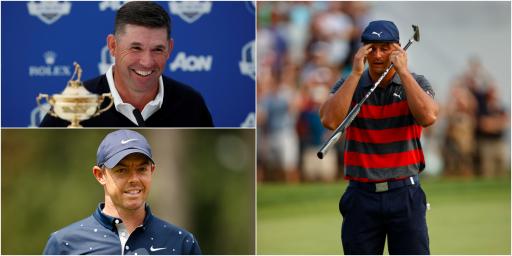 Here at GolfMagic, we decided to think of 10 things we would like to see at the forthcoming Ryder Cup.

Some are things we can only hope to see, while others are moments that could legitimately happen.

The three days of golf promises to deliver everything we expect and then some.

If anything, there is probably too much hype ahead of the Wisconsin showdown considering the fact it has been delayed for a year.

What makes the Ryder Cup so special is the drama, so here's hoping this weekend promises no different.

Here is what we'd love to see:

Ian Poulter retains his 100 per cent record in the singles.

Poulter is a Ryder Cup maniac.

He lives and breathes this weekend and what it embodies.

This is likely his last hurrah as a player.

What better way to cap it off.

More of this passion next week #TeamEurope pic.twitter.com/bMoh6YL1Di

If you're European you'll no doubt have your favourite McIlroy moment.

There are just so many.

His putt against Patrick Reed?

Or his miracle shot when paired with Ian Poulter at Le Golf National in Paris.

How did he not fall in the water?

Who can say, but more of the same please.

It has to happen, surely? Doesn't it?

A rules controversy, free relief from a dodgy situation.

Did he shout fore?

Something is bound to happen and sparks should fly.

On the 50th anniversary of The Concession, Jack Nicklaus and Tony Jacklin have been reflecting on one of sport's greatest acts of sportsmanship.

Again, there are probably too many to name.

The concession is the most famous sporting gesture of this famous tournament.

One of the most iconic moments in sporting history, not just golf history.

The @RyderCupEurope celebration at The Belfry was one for the ages. pic.twitter.com/71G8qgTksw

Not all heroes wear capes.

They come in all shapes and sizes.

Rookies who come alive at the right moment and drain a putt miles away.

Remember Paul McGinley at the Belfry?

Who will be the unlikely hero this week?

Brooks Koepka on his feud with Bryson DeChambeau pic.twitter.com/0BTnMmyUSQ

Brooks Koepka and Bryson DeChambeau are paired together

Not much to say about this one really, is there?

We'd love to see it, but it's doubtful Stricker will give us this one.

You get a song and dance.

Tommy Fleetwood and Francesco Molinari were paired together in Paris and were unbelievable.

They won all their matches, grabbed four points and were dubbed Molliwood.

Molinari is absent this year after a poor season and a few injuries.

But there is an opportunity there to match them.

A forgettable time at Hazeltine in 2016.

Rors and Patrick Reed played out an epic as the United States won.

Fitzy deserves his place in the side and truly should be a world star.

Can he announce himself in style?

Perhaps the biggest surprise of all is that an ageing Westy qualified automatically.

He's a European Ryder Cup legend and could overtake Nick Faldo's tally of 24 points this week.

Sergio Garcia holds the most points secured by a European player with 25.5 points.

The moment of the decade

Martin Kaymer holing the winning putt to complete the Miracle at Medinah.#momentsofthedecade pic.twitter.com/g1dfWl3Zgj

Preferably for Europe, but we're a bit biased.

Let's face it, claiming victory from the jaws of defeat always feels that much sweeter.

There's every chance either side could be into what looks like an unsurmountable lead by Saturday evening.

Will we see it?

RELATED: TIGER WOODS TO GIVE TEAM USA A MOTIVATIONAL SPEECH