Brooks Koepka controversy: If I break my wrist it's on f***ing BOTH of you

The four-time major champion was denied relief from a tough lie which left Sergio Garcia in stitches. 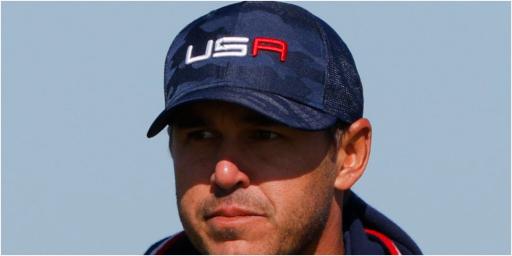 Brooks Koepka was left fuming and swore at a rules official after he was denied relief from an awkward lie at the Ryder Cup.

The big-hitting American was faced with a terrible lie next to a bunker on the par-4 15th hole after a wayward tee shot from Daniel Berger.

It appeared his ball was near a drain pipe on a downslope and Koepka called for a second opinion after being denied relief.

It took several minutes for the ruling to be confirmed before he eventually hit his approach shot onto the green.

Koepka clearly did not want to hit the shot and was perhaps worried he would injure his vulnerable wrist.

That injury meant he nearly missed the Ryder Cup.

The pro-European commentary suggested the four-time major champion "just get on with it".

If he didn't want to injure his wrist he should've taken a drop, they said.

Sergio just spit out his drink laughing so hard at Brooks Koepka going back and forth with the rules official. pic.twitter.com/5PfC8NRYwZ

During the discussion in the ruling, the coverage picked up Koepka saying: "You realise it's on a downslope? And I've gotta chop down on it.

"Did you not see it a couple of weeks ago?"

Koepka was denied a free drop twice and ultimately hit a fantastic shot onto the green as his team made par.

He told the officials: "If I break my wrist, it's on fucking both of you."

Berger was also disgruntled with the ruling.

But Sergio Garcia, who was teamed with Jon Rahm, saw the funny side of it.

He could be seen spitting out his drink and laughing as Koepka complained of his situation.