The young rookie has made a fantastic start to his Ryder Cup career - but his hoodie has divided opinion. 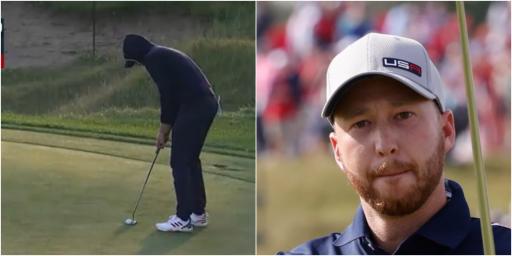 Daniel Berger has made a solid start to his Ryder Cup career as the American rookies dominated the day one action.

The youngster has shown he has the talent and nerve to withold the pressure and he's only played one full day.

Racing to a 6-2 lead, the Europeans have a tough ask to get back into the competition that at this point looks like it could get embarrassing.

A humourous highlight of day one included Sky Sports butchering Berger's name before he hit his first tee shot.

They listed him as Daniel Burger which we're not quite sure if this was an intentional slight.

While it could be said the American audience may not know who some of the Europeans are it's pretty sloppy if it wasn't intentional.

One thing however is for certain at this Ryder Cup and that is the fact the hoodie is here to stay.

Tyrrell Hatton was one of the first to wear it on the course but Berger had his up during the second day's play at Whistling Straits.

Daniel Berger putting with his hood on is a vibe. #RyderCup pic.twitter.com/XF8vNUbkCI

Berger drained birdies on the first two holes as he and partner Brooks Koepka raced to an early lead over Sergio Garcia and Jon Rahm.

It's fair to say his attire has divided opinion as the young American looked like he could be somewhere other than a golf course.

Some suggested his style was "straight vibin" while another said he looked like he was about to rob a liquor store.

Daniel Berger with a putter pic.twitter.com/OQjGhDs07Y

Hooded Daniel Berger is a cold-blooded vibe the likes of which we have only seen from one other person. #RyderCup #RyderCupUSA #Gousa pic.twitter.com/O5PRTlHWDZ

Berger making a birdie putt at the 1st with his hoodie actually “up” is a level of trolling not seen before in RC history. pic.twitter.com/5NHeusLtbp

NEXT PAGE: WAS HARRINGTON RIGHT TO DROP RORY MCILROY?