Team Europe in danger of a drubbing at 9-3 down heading into the Saturday Fourballs. 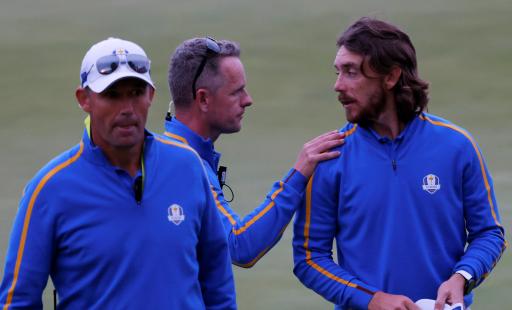 In a race to get back into the Ryder Cup at 9-3 down, Team Europe captain Padraig Harrington has sent out Shane Lowry and Tyrrell Hatton in the opening match of the afternoon fourballs on day two.

Harrington has opted for his trusted pair of Jon Rahm and Sergio Garcia for match two, and they will face Steve Stricker's new pairing of Brooks Koepka and Jordan Spieth.

Tommy Fleetwood and Viktor Hovland are back together again as they were yesterday and they will face Bryson DeChambeau and Scottie Scheffler in match three.

In the final match of the day, Rory McIlroy and Ian Poulter, who were rested for the morning foursomes, are out against the in-form pairing of Dustin Johnson and Collin Morikawa.

McIlroy had played in 26 straight Ryder Cup matches since making his debut in 2010.

Europe find themselves with it all to do on Saturday afternoon as they trail by six points heading into the fourth session of the week.

USA need 14.5 points to regain the Ryder Cup, while Europe need to get to 14 to retain the cup.

There will be 12 singles matches on Sunday.

Ryder Cup
PGA tour
brooks koepka
bryson dechambeau
Tiger Woods
Previous
Brooks Koepka controversy: If I break my wrist it's on f***ing BOTH of you
Next
And that's the BOTTOM LINE, cause JT says so: Thomas chugs beer at the Ryder Cup