Bryson DeChambeau on his MONSTER drive: I swung away at it and said see ya later

The 28-year-old admitted it was downwind and claimed he doesn't take advantage of his long driving enough. 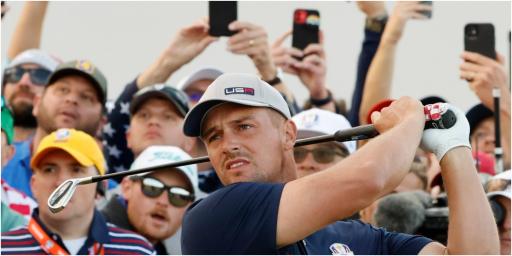 We knew there would be fireworks at the Ryder Cup with Bryson DeChambeau.

And the golf scientist delivered them on his first hole at the 43rd edition of the Ryder Cup at Whistling Straits.

He sent his drive miles left on the first tee to the rapturous home crowd - didn't shout fore - which cracked a woman squarely on the shin.

It has been reported he signed a golf ball for the injured spectator, before he went on to make birdie.

He would halve the match with Scottie Scheffler as the Americans made seemingly every putt on the first day.

On the 581-yard hole, DeChambeau took an absurd line off the tee, aiming further right than anyone has before.

With one massive swipe of his driver, the 2020 US Open champion hit his ball so far down the fairway it confused the cameraman.

"That's not real. That is UNBELIEVABLE!"

Bryson DeChambeau hits a sensational 417-yard drive off the tee!

Snagged Bryson DeChambeau for a moment to talk about:

-His tie
-His 417-yard drive
-His ping-pong revenge pic.twitter.com/llIHS3vNbi

He spoke to Golf.Com's reporter Dylan Dethier about his match, being a rookie and that now infamous drive.

Bryson admitted it was  downwind and added: "But still, you gotta hit a good drive up to 95 - 97mph ballspeed to do something like that.

"I swung away at it, caught it high up the face with no spin and said see ya later."

The big-hitting American also admitted he had previously lost to Daniel Berger at ping pong but has since evened the score.