Is Bryson DeChambeau changing perceptions at the Ryder Cup?

Bryson DeChambeau has enjoyed his time with golf fans and the home crowds at Whistling Straits in Ryder Cup week. 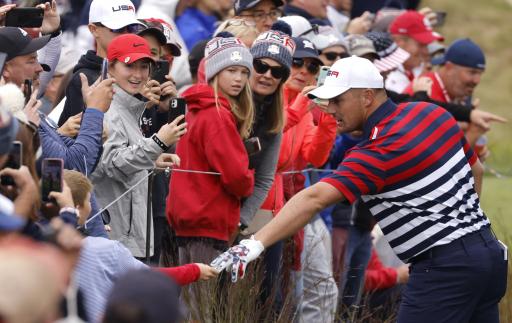 He is not only physically different, but his public profile has increased massively and he has become the most talked-about and controversial figure on the PGA Tour.

He has criticised his Cobra driver in an interview at The Open, he has pursued a public feud with Brooks Koepka and he has been involved in debates over shouting 'FORE' off of tee boxes and dealt with fans shouting 'Brooksy' at him.

Some would say he has brought a lot of controversy on himself, and there have been moments when the 28-year-old has shown tension and frustration towards each of these issues.

However, it looks as though DeChambeau has turned a corner this week in Wisconsin. He has always been flamboyant and 'different', as he describes himself, but yesterday he excelled himself during a practice session.

On the first tee box, he was running around, engaging and riling up the American fans. He was bombing drives as per usual, then encouraging a response from the crowd, waving his arms and making gestures.

It was great to see. Without fans, the Ryder Cup is essentially pointless. We can tolerate watching PGA Tour events without a raucous atmosphere, but there would be no Ryder Cup without the hostility of the spectators.

The former US Open champion has connected with the fans with his antics, he is in his element when there are thousands of people on site who cannot wait to see him bomb a 400-yard drive.

We don't want people shouting 'Brooksy', we don't want golf fans winding him up. DeChambeau has endeared himself to the Wisconsin people this week, and they will be even more excited to see him tee off, whenever US captain Steve Stricker sends him out.

Earlier in the week, he shared a word with Koepka on the driving range. We would all love to know what was said, but considering the pair have exchanged public arguments and comments with one another, this was a significant moment.

The crowd loved this as well and DeChambeau once again engaged with them when the conversation was finished. The footage was intriguing, compelling and left us wanting to know more.

It seems that DeChambeau is on his way to dispelling the issues that have dominated his season. He seems to have made amends with his four-time major-winning teammate and he is on his way to winning the fans over at the Ryder Cup.

He has been happy and comfortable this week. There has been a clear sense of freedom that he has enjoyed so far, almost as if he had to get out of the spotlight of the PGA Tour.

DeChambeau already has a large fanbase, but his performance at the Ryder Cup could increase this ten-fold. He may be a major champion and an eight-time PGA Tour winner, but this week at Whistling Straits could launch himself into Ryder Cyp stardom too.

NEXT PAGE: RYDER CUP OFFICIALLY BEGINS WITH THE OPENING CEREMONY AT WHISTLING STRAITS