During a lighthearted opening ceremony, captains Padraig Harrington and Steve Stricker announced the pairings for the Friday foursomes session. 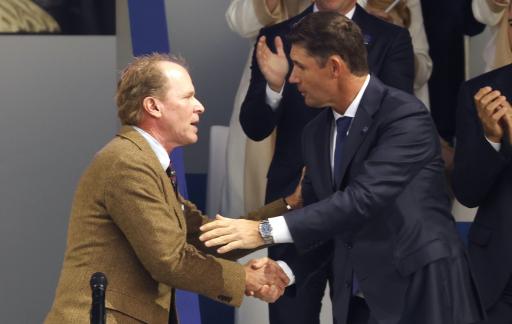 The 2021 Ryder Cup has officially begun. We have met the teams, heard the captain's speeches and we know the first batch of pairings on day one.

The opening ceremony was a lighthearted and fun event and as ever on US soil, there were plenty of American fans in front of the stage cheering and showing their support.

After Jim Richerson, the President of the PGA of America, made his speech to the crowd, both Team Europe and Team USA walked on to the stage led by Padraig Harrington and Steve Stricker.

Harrington, a three-time major champion and six-time Ryder Cup player, made his speech first and he was keen to thank the American fans for their warm welcome to Wisconsin.

Yesterday, Team Europe paid homage to the host state's rich history of cheese production by wearing cheesehead caps in their practice rounds and wearing yellow and green stripes on their tops, representing the Green Bay Packers.

The Irishman presented his team to the crowd before Stricker stepped up to perform a heartfelt speech to his wife and his children, who were all present at the ceremony.

The honour of the occasion brought a tear to Stricker's eye, even though he jokingly revealed he had a couple of beers before stepping on stage to calm his nerves.

And then, the moment we were all waiting for came. After the European and American national anthems were heard, the pairings for the first session on day one were revealed.

In match one of the Friday foursomes, the Spanish pair of Jon Rahm and Sergio Garcia will face Jordan Spieth and Justin Thomas in what is a mouthwatering affair.

In the second match, Paul Casey teams up with rookie Viktor Hovland and they will face the formidable US duo of Dustin Johnson and Collin Morikawa.

In the third match, Lee Westwood will make begin his 11th appearance at the event by partnering with Matt Fitzpatrick against Brooks Koepka and Daniel Berger.

Then in the fourth and final match, the stalwart pair of Rory McIlroy and Ian Poulter will face the rookie pair of Patrick Cantlay and Xander Schauffele.