Ryder Cup 2021: Where is Tiger Woods and will he EVER play golf again?

The big cat is hopeful of making a comeback and is recovering well, according to Steve Stricker. 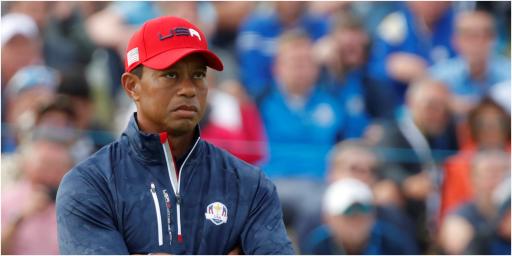 Tiger Woods is not at the Ryder Cup either as a player or a vice-captain, so where is he?

The big cat, now 45 years old, is still recuperating after he flipped over his car when allegedly speeding in February.

He was reportedly travelling at approximately 85 to 87mph in a 45mph zone when he lost control and the car overturned.

Lucky to be alive, the 15-time major champion escaped with severe injuries to his right leg.

He has not spoken publicly about his recovery, just fleeting messages filtered through by those who claim to be in the know.

Woods, a father of two children to Charlie Axel Woods and Sam Alexis Woods, will try and mount another sensational comeback.

He has not played a golf tournament since the Masters held in November 2020 and the extent of how serious his injuries are is unknown.

Woods has been posting pictures on his social media channels here and there that show him on crutches.

He is reportedly able to put a little bit of weight on his injured ankle now.

While paparazzi have also snapped him out and about, much to his displeasure.

Woods wanted to be at the Ryder Cup and gave his U.S. side a motivational speech before the tournament began.

He is still being relied upon for information and pep talks, according to vice captain Davis Love III.

While Woods has spoken to GolfDigest briefly about his recovery.

He told the publication his injuries and recovery "is a completely different animal" compared to previous injuries.

Woods has played in eight Ryder Cups as a team member.

His record is four wins, two draws and two defeats in the singles.

He acted as a vice captain at Hazeltine in 2016 but missed the 2014 Ryder Cup with a back injury.

He also missed out at the 2008 Ryder Cup due to knee surgery.

Jack Nicklaus expects Woods to make a comeback, as the Golden Bear said as long as he can chip and putt he'll be okay.

NEXT PAGE: IS BRYSON CHANGING PERCEPTIONS AT THE RYDER CUP?