And that's the BOTTOM LINE, cause JT says so: Thomas chugs beer at the Ryder Cup

The one-time major champion resembled a former WWE champion on the first tee at Whistling Straits. 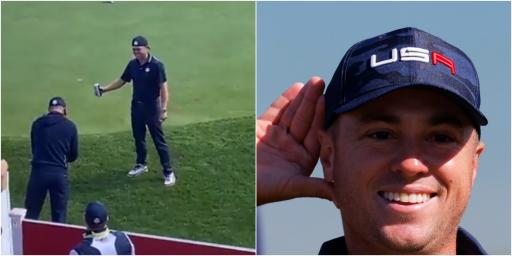 Justin Thomas celebrated taking another point off Europe at the Ryder Cup by chugging a beer on the first tee.

With what now looks likely to be an unsurmountable 9-3 lead, Thomas was in good spirits as he revelled in the crowd's cheers.

Ahead of the day two fourball session he was spotted with Daniel Berger downing a can of beer.

It reminded us of former WWE champion Stone Cold Steve Austin as he slammed the can down onto the Whistling Straits turf.

Before he downed the cold lager he was seen chucking out free tinnies to the crowd.

Thomas teamed up again with Jordan Spieth to claim a point off rookies Bernd Wiesberger and Viktor Hovland in the morning session.

They were trailing for most of the match but turned it around to stun the European team.

IMAGINE NOT ROOTING FOR THIS TEAM! pic.twitter.com/7GhmrFn7Zm

RELATED: CAN EUROPE TURN THINGS AROUND?

And it was reason for Thomas to celebrate as he was spotted on the first tee waving the United States' flag and leading the chants.

The arena was full at the first with many spectators filming Thomas chug the beer in what was only a matter of seconds.

As we have seen in previous Ryder Cups it is not over until it's over but the Americans are firmly in control.

Thomas sat out the afternoon session after he earned a well-earned rest.

He has been described by many fans and commentators as the Americans' hype man.

He gets as pumped as any when he holes a putt and bursts with emotion.

NEXT PAGE: BROOKS LOSES HIS TEMPER AND SWEARS AT OFFICIAL