Butch Harmon on Brooks vs Bryson at Ryder Cup: "Suck it up and win a damn point" 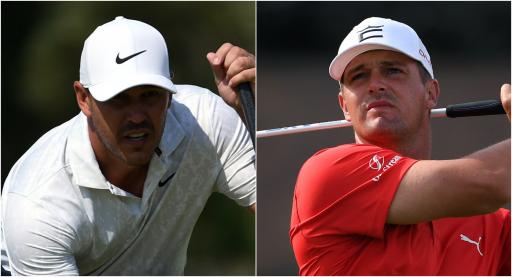 Butch Harmon declared that he would pair Brooks Koepka and Bryson DeChambeau together at the Ryder Cup, telling them "suck it up and go win a damn point."

Harmon is a legendary golf coach and throughout his teaching career, he has worked with some of the best players in the world such as Tiger Woods, Phil Mickelson, Ernie Els and Greg Norman.

The Koepka and DeChambeau feud has dominated the 2021 PGA Tour season, and it stemmed from when Koepka rolled his eyes at DeChambeau for making noise during an interview at the PGA Championship.

They now find themselves on the same team at the Ryder Cup, but both players have assured US captain Steve Stricker that the spat will not be a problem in the team dressing room.

RELATED: BROOKS KOEPKA CONFIRMS HE WILL BE AT RYDER CUP - "I'LL BE THERE, I'M GOOD TO GO"

"Hell, I'd pair them together," said Harmon on Claude Harmon III's podcast, Off The Course.

"I'd say 'Alright boys, get your head out your ass and go play.' I'd put them out on the first day, first match out, Brooks and DeChambeau.

"This is about the USA. You can have your battles next week. Right now, you guys are first out, go get a damn point. Maybe I should be a Ryder Cup captain."

Harmon III compared the situation to when Woods and Mickelson were paired together at the 2004 Ryder Cup at Oakland Hills, but Harmon said there was no feud between these two golf legends.

DeChambeau was paired with Woods and Mickelson at the 2018 Ryder Cup, but the 2020 US Open champion failed to win any points at Le Golf National.

There has been much speculation as to how Stricker will use DeChambeau, while Koepka has confirmed that he has overcome a wrist injury to be available for the event.

NEXT PAGE: APOLOGETIC SPECTATOR CAUGHT UNAWARE OF JON RAHM STOOD BEHIND HIM ON PGA TOUR