"I see them walking together side-by-side in the fairways and with a vision of solidarity, if you will." 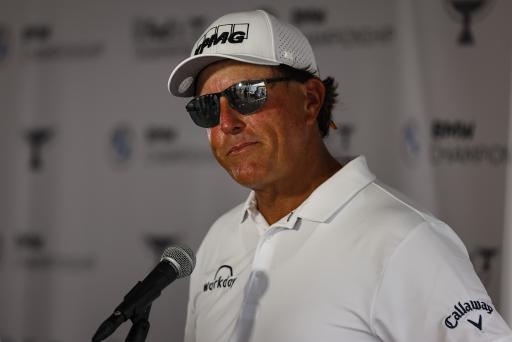 For the first time in 25 years, Phil Mickelson will not be playing at the forthcoming Ryder Cup in Whistling Straits.

Instead, he'll serve his nation as a vice-captain to US captain Steve Stricker after amassing an overall record of 18-22-7.

Lefty has made more appearances than any other US player in history, but has only been on the winning side on three occasions.

It was bound to happen, and he was recently asked what he thinks the formula is for Europe's enduring success home and away.

Stephen Curry has the ultimate trust in Phil Mickelson! This is amazing! pic.twitter.com/6CyBf6hbPg

Appearing on a recent podcast of Five Clubs, Mickelson explained his theory and broke it down in detail.

"I see the way they support each other," Mickelson said at the beginning of what was seemingly verging on a rant.

"And I see the way that they have this foundation of support amongst each other to lift each other up.

"I see them walking together side-by-side in the fairways and with a vision of solidarity if you will.

"I see them helping each other get the best out of each other."

Mickelson is partly to blame, he said, as he feels his criticism of the captains in 2004 and again 10 years later was a mistake.

He counts those public criticisms as huge regrets in his career and added of the Europeans: "I see a game plan heading into the matches.

"I think that type of structure makes it easier, or gets rid of some of the anxiety and the pressure because you know what to expect.

"It puts you in a position to play your best and to succeed ultimately."

NEXT PAGE: JON RAHM REACTS TO PLAYER OF THE YEAR SNUB

DP World Tour
Matt Fitzpatrick labels Sheffield United owners PATHETIC after they sack manager
PGA Tour
How Jordan Spieth came back from the ABYSS, according to his long time coach
Golf news
Toptracer EMEA Sales Director gears up for MAMMOTH 24-hour charity world record
PGA Tour
Bryson DeChambeau on Koepka: "It's DISGUSTING how he has tried to knock me down"
PGA Tour
What clubs did Collin Morikawa use to win the DP World Tour Championship?