Europe SILENCE USA at Solheim Cup | Can the Ryder Cup team do the same?

Catriona Matthew's Solheim Cup side thrived in the midst of overwhelming home support, can the Ryder Cup side do the same? 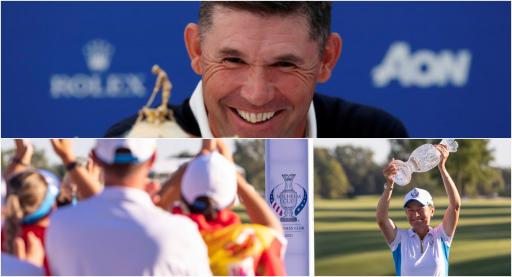 Such has been Europe's struggles in the Ryder Cup overseas, the last time they won it was described as a miracle.

Before Medinah in 2012, it was 17 years ago, in Michigan, that Europe tasted an away win with an emphatic victory.

It was by far the biggest margin of victory for a European side and remains so.

Padraig Harrington will of course be aware that he wants this trend of home victories to end, and to stop with him as captain.

It would bookend a remarkably successful career that has seen him win three major championships including two Opens.

Usually, there is a sense of who might prevail.

Here, at Whistling Straits, the Americans are heavy favourites.

But there a few interesting sub-plots developing and this is by far a foregone conclusion.

The alleged bad blood between some in the American side and lack of team spirit news articles have begun to crop up again.

And of course what it will be like with the return of fans - the vast majority of them favouring Team USA.

Travel restrictions mean there will be only a small European presence in the galleries lining the fairways.

Catriona Matthew's European side appeared to not be affected at all and silence the crowds.

Can Rors et al do the same?

RELATED: HAS KEVIN NA PLAYED HIS WAY ONTO US RYDER CUP TEAM?

Harrington's approach in the midst of all this will be interesting and fascinating to watch.

His approach to the captaincy has been markedly different from Thomas Bjorn's approach.

Bjorn essentially took a year out to focus on his role, while Harrington has continued to play on the PGA Tour.

Harrington will also play at the forthcoming BMW PGA Championship at Wentworth Club this week.

Taking down a legend on debut @JonRahmpga's charge down the final stretch saw the Spaniard win his first point for Europe.@bp_America | #RyderCup pic.twitter.com/Dkc4HPZPPg

Then he'll announce his three picks.

The worst kept secret in the world of golf is Poulter and Garcia are definitely in, which leaves one spot remaining.

Rory McIlroy said this week, in his opinion, the role of a captain is sometimes overplayed.

He has played under average captains and won and the captains don't hit any shots, he said.

Harrington may seem like the jovial, happy-go-lucky guy on Tour - but he is a smart man.

His decisions will be informed and calculated.

It will be engrossing to see how it all plays out.