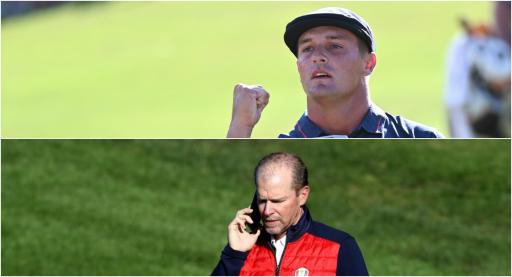 That's the message from the Team USA camp via vice-captain Davis Love III as the Americans head to Whistling Straits to practice.

Love III, who previously captained the winning side at the 2016 Ryder Cup at Hazeltine to a 17-11 victory, admitted in years gone by the Europeans had them "over a barrel" purely because they practiced a bit more.

That's what happened at Le Golf National when they were resolutely beaten in Paris, he told Golfweek.

Love III also captained the side at Medinah in 2012.

"The other team knew the course way better," he said. "We're going to focus on breaking down the course over next couple of weeks until we get there.

"It's important for us to gather local knowledge and pass it on to the guys that don't have the intimate knowledge as guys like DJ".

There is experience on both sides having played this course. It has hosted the PGA Championship in 2004, 2010 and in 2015.

Love said they relied on Tiger Woods' experience to help them understand Hazeltine.

He told the podcast: "Tiger showed us how to get ready for the course in 2016. We learned a lot why beat us all those years."

One question also emerging for the Americans is who will partner Bryson DeChambeau.

These views never get old pic.twitter.com/BUcwsw7UFt

He's played with Tiger and Phil Mickelson before.

They aren't playing this time around.

And he's also partnered Tony Finau at the Presidents Cup in Australia.

Ideal candidates, in GolfMagic's opinion, include Patrick Cantlay, Dustin Johnson and Patrick Reed if he gets picked.

Cantlay has already expressed sympathy for DeChambeau as he has been in the limelight over the last few months.

He poured cold water on the suggestions there were tensions when DeChambeau asked him to "stop walking" during the BMW Championship in their playoff for the ages.

One calm head. One hot head.

They do say opposites attract.

Whoever partners DeChambeau, there is no doubt the galleries will go loopy for them.