Was Padraig Harrington right to BENCH struggling Rory McIlroy at the Ryder Cup?

The Northern Irishman was out of sorts on the first day of the Ryder Cup and is sitting the first session out on day two. 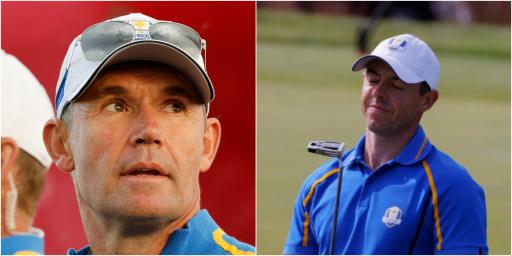 What a dreadful start at the 43rd edition of the Ryder Cup for one of Europe's supposed bright lights Rory McIlroy.

Padraig Harrington, Europe's captain, has already been resoundly criticised by fans and pundits for supposedly pushing the panic button.

He dropped the Northern Irishman for the morning foursomes of day two after he was beaten twice on day one.

McIlroy and his partner Ian Poulter failed to muster their artistry from Le Golf National in the glistening Paris sunshine.

Their escape acts were replaced with poor shots, slumped shoulders and looks of confusion across each man's brow.

And his display gave McIlroy, the world number 15, some unwanted Ryder Cup records.

His omission from the first session of the second morning brings to an end a run of 26 matches consecutively played since his 2010 debut.

It was also the first time McIlroy had lost two straight matches on the opening day of the competition.

Harrington suggested before the Ryder Cup he felt like it was a "red flag" to pair him up with fellow countryman Shane Lowry.

Which is why it was so bizarre he decided to send them out in the afternoon after such a dreadful morning.

McIlroy wasn't just bad, he was dreadful as he and Poulter went down 5&3.

He and Poulter made bogeys and doubles as the United States pairing of Xander Schauffele and Patrick Cantlay were merciless.

Rookie Lowry and Rors did go one up against Tony Finau and Harris English but crumbled again on a way to a 4&3 loss.

Harrington defended the decision to bench McIlroy for the first time in his Ryder Cup career.

"He is already a leader," insisted Harrington.

"You saw him out there after a tough day, he was out following those matches and supporting his team.

"Yeah, the golf didn’t go as well as he would have liked, but I’m not second-guessing him for a second in terms of his leadership and what he does for my team."

So we have a leader of the team twiddling his thumbs as Europe try to mount another sensational comeback.

But while this approach may seem like what Harrington needs to do to win, it will simply fuel the Americans so much more.

This is a new look American side with the bit between their teeth and the Europeans looking like rabbits in headlights.

Their rookies are undefeated.

And they've benched Rory. For the first time.

This is the Ryder Cup and McIlroy simply has to be out there playing.

NEXT PAGE: DAY ONE VERDICT - WHERE DID IT GO WRONG FOR EUROPE?